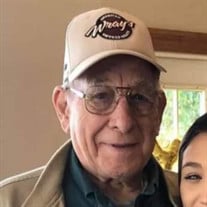 Ivan Eugene Wray, age 83, of Moravia, passed away on Thursday, December 17, 2020, at MercyOne Medical Center in Centerville, Iowa, surrounded by his loved ones. Ivan was born on March 4, 1937, to Harry and Mildred (Stevens) Wray in Livingston, Iowa. He grew up and attended school in Centerville. On February 25, 1956, he was united in marriage to Gail Mae Tharp. Ivan and Gail shared 48 years of marriage prior to her passing away on June 4, 2004. Ivan then married Cynthnia (Black) Owens on January 15, 2005. Ivan worked at Curwood-Bemis. He was a very hard worker and farmed for many years, which was his passion. He was very social with an ornery side. He enjoyed drinking coffee at McDonalds with his friends and loved to ride around on his golf cart. He loved his family and cherished the time spent with them, especially his grandchildren and great grandchildren. Ivan is survived by his wife, Cindy of Moravia; 6 children, Charlotte Wray of Centerville, Carla Cormeny of Moravia, Cheryl (Pritesh) Wray of Springfield, MO, Carol (Drew Streets) Rollman of Melrose, Chris Wray of Branson, MO, and Chad (Roni) Wray of Belton, MO; 10 grandchildren; 20 great grandchildren; 6 great-great grandchildren; a sister, Maebeth Natzke; 4 sisters-in-law, Ruth Davis, Ethel Houser, Margaret Stottlemyre, and Sharon (Jim) Burns; and a brother-in-law, Paul (Helen) Tharp. He is preceded in death by his parents, Harry and Mildred; his first wife, Gail Mae; a sister, Donna Marie in infancy; 2 sons-in-law, Larry “Tiny” Cormeny and Jim Rollman; his parents-in-law, Burdette and Maxine Tharp; a brother-in-law, Gale Natzke; and 3 sisters-in-law, Mable Ellison, Betty Cubbage, and Grace Jackson. Visitation will be held from 4:00 p.m-8:00 p.m., on Tuesday, December 22, 2020, at the Tharp Funeral Home in Albia, with Ivan’s family present from 6:00-8:00 p.m. to greet family and friends. Funeral services will be held at 10:30 a.m., Wednesday, December 23, 2020, at the Tharp Funeral Home in Albia, with Pastor Travis Decker officiating. Burial will follow services in Jerome Cemetery in rural Appanoose County. Due to the most recent proclamation and enhanced public health measures for the state of Iowa, masks will be mandatory for all those in attendance over the age of 2. A memorial has been established to the National Kidney Foundation.

Ivan Eugene Wray, age 83, of Moravia, passed away on Thursday, December 17, 2020, at MercyOne Medical Center in Centerville, Iowa, surrounded by his loved ones. Ivan was born on March 4, 1937, to Harry and Mildred (Stevens) Wray in Livingston,... View Obituary & Service Information

The family of Ivan Eugene Wray created this Life Tributes page to make it easy to share your memories.

Ivan Eugene Wray, age 83, of Moravia, passed away on Thursday,...

Send flowers to the Wray family.