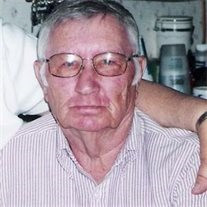 Irwin Dale Post, age 82, of rural Albia, died Monday, September 1, 2008, at the Veterans Administration Central Iowa Health Care System in Des Moines. Irwin was born December 9, 1925, in Hay Dock, Iowa, to Abraham and Lois (Byereley) Post. On February 11, 1954 Irwin married Annabelle Williams in Albia, Iowa. They have been married for 54 years. Irwin worked at John Morrell's in Ottumwa and helped farm before entering the U.S. Army. He served during the Korean War from 1950 to 1953. During his service he received a purple heart. After his service Irwin farmed all his life until his retirement. Irwin was a member of the American Legion, Howard Cessna Post # 136, the V.F.W., and the D.A.V. He enjoyed hunting, fishing, and spending time with his family and friends, especially his grandchildren. Irwin is survived by his wife Annabelle Post of rural Albia; four children, Dalene (Allen) Hamilton of Hiteman, Dale (Darlene) Post II of Albia, Daryl (Mel) Post of Alamogordo, New Mexico, and Dustin (Tammy) Post of Albia; 10 grandchildren; 6 great grandchildren; one step grandson; and one step great grandson. Irwin is also survived by one sister Sandra (Gus) Sampson of Lovilia; one brother Gene (Joann) Post of Albia; and one sister-in-law, Donna Post of Lovilia. Irwin is preceded in death by his parents, Abraham and Lois; three brothers, Harlan, Kenny, and Don Post; and two sisters, Pauline Smith and Evelyn Post. A Funeral Service will be held at 10:30A.M., Thursday, September 4, 2008, at the Winfield Funeral Home in Albia, with Rev. Bill Iammatteo - Code officiating. Burial will follow services at Woodlawn Cemetery in Lovilia, with military rites provided by the American Legion, Howard Cessna Post # 136 of Albia. Visitation for Irwin will begin at 11:00 A.M., Wednesday, September 3, 2008 at the Winfield Funeral Home in Albia. Irwin's family will be present during the day and from 6 to 8:00 P.M., Wednesday evening. A memorial will be established at a later date.

The family of Irwin Dale Post created this Life Tributes page to make it easy to share your memories.