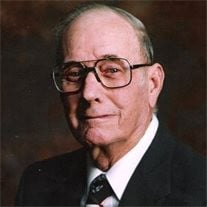 Howard E. Davis, age 85, of rural Albia, Iowa died early Sunday morning June 24, 2007 at the extended care facilities of the Monroe County Hospital of Albia. Howard was born August 26, 1921 near Buxton, in Mahaska County, Iowa to Richard T. and Elizabeth Mae (Jones) Davis. Howard attended Garfield Country School, and helped on the family farm. He married Vivian Casebolt on March 1, 1942. Vivian passed away in April of 1988. Howard farmed and raised cattle his entire life. His passions were farming, raising cattle, and enjoying his two grandchildren. He was a member of the Cattlemen's Association, and the Monroe County Farm Bureau. In 2001, Howard was the recipient of the Monroe County Farm Bureau Agriculture Hall Of Fame. Howard enjoyed and supported 4H programs and the Monroe County Fairs. Howard is survived by one son, Raymond Davis and his wife Linda of Albia; two grandchildren, Kelly Norton and her husband Mark of North Liberty and Aaron Davis of Albia. He is preceded in death by his parents, Richard and Elizabeth; his wife, Vivian; two brothers, Clifford Davis and Gilbert Davis, in infancy; and two sister, Irene Larson and Mabel Davis. Funeral services will be held Tuesday, 10:30 A.M., June 26, 2007 at the Winfield Funeral Home in Albia, with Rev. Lynda Carlson officiating. Burial will follow services at Forrest Lawn Cemetery in Oskaloosa. Visitation will open after 12:00 P.M. (Noon) on Monday, June 25, 2007 at the Winfield Funeral Home in Albia with the family present until 8:00 P.M. A memorial has been established to the Monroe County Hospital Auxiliary.

The family of Howard E. Davis created this Life Tributes page to make it easy to share your memories.