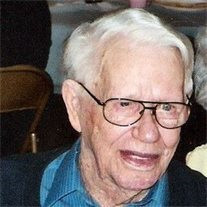 Homer Ray Stewart, age 95, of Albia, passed away Saturday morning, August 16, 2008, at the Monroe Care Center in Albia. Homer was born November 26, 1912, near Miami, Iowa, to Ernest and Jennie Stewart. On September 8, 1939 he married Agnes Lennea Carlson in Unionville, Mo. Following high school Homer served two years with the Civil Conservation Corporation. Homer farmed for forty- seven years and was employed by the ASC office in Albia for twenty of those years. After retirement Homer and his wife enjoyed sixteen winters in Pharr, Texas establishing many friendships. Woodworking occupied many days of Homer's retirement. These wooden treasures will be enjoyed by his family for years. He was an avid vegetable gardener, loved to fish, hunting and enjoyed playing cards. In 1995 Homer and his wife moved to Albia, living there until their deaths. Homer was gifted with an excellent mind and memory allowing him to enjoy TV sports and playing Canasta, during his last days Homer is survived by his four children; Janice (Wayne) Schroeder of Dodge City, KS, Sandy Williams of Newton, IA, Wayne (Bonnie) Stewart of Kansas City, MO, and Irene (Mike) Lathen of Albia, IA,. Homer also leaves sixteen grandchildren, twenty- seven great grandchildren, and three great-great grandchildren. Homer is preceded in death by his parents; Ernest Stewart and Jennie Stewart Lennie, his wife; Agnes, a son Larry James Stewart in infancy and a great granddaughter Alexandria Schroeder. Homer is also preceded in death by one brother; Russell Stewart, and two sisters; Mildred Gardner and Erma Bonnett. A Funeral Service will be held at 10:30A.M., Tuesday, August 19, 2008, at Winfield Funeral Home in Albia, with Rev. Kevin Leveck, Officiating. Burial will follow services at Oak View Cemetery in Albia. Visitation for Homer will begin at 2:00 P.M., Monday, August 18, 2008 at the Winfield Funeral Home in Albia. Homer's family will be present during the day and from 6 to 8:00 P.M., Monday evening. Memorials may be made in memory of Homer Stewart.

The family of Homer Ray Stewart created this Life Tributes page to make it easy to share your memories.