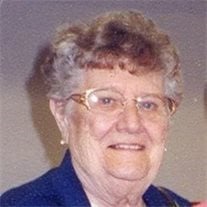 Helen "Honey Lou" Woodard, age 79, of Albia, Iowa died early Friday morning, March 10, 2006 at the Monroe County Hospital in Albia. Helen was born November 28, 1926 in Hocking, Iowa to Herman Manford and Helen Susie (Romanco) Hickenlooper. Helen attended county school in Hilton and graduated from Albia High School, class of 1943. She married Jack Woodard on June 2, 1946 in Albia. Jack died October 18, 1982. Helen and Jack owned and operated Woodard Grocery in Albia for several years. She also worked at the Albia Super Value for over 20 years, retiring in 1986. Helen later married Roy S. Hayworth on September 19, 1987. He died in March of 1989. Helen was a member of the First Christian Church in Albia. She was also a past member of the American Legion Auxiliary, and past Girl Scout Leader in Albia. Helen is survived by three children, Vicki (Denny) Luptowski of Ankeny, Jack M. (Regina) Woodard of Eldridge, and Cindy (Deuce) Graham of Albia; 5 grandchildren, Megan O'Neal, Scott Conley, Rebekah, Jillian, and Jack Tyler Woodard; 3 step grandchildren, Erik, Heather, and Brett Graham; and one step great granddaughter, Allison Graham. Helen is also survived by several nieces and nephews. She was preceded in death by her parents, Herman and Helen; her husbands, Jack and Roy; and one sister, Mary Estella Davis. Funeral services will be held at 1:00 P.M., Monday, March 13, 2006 at the Winfield Funeral Home in Albia with Rev. Lynda Carlson officiating. Burial will follow services at Oakview Cemetery in Albia. Visitation will open at 2:00 P.M. on Sunday, March 12, 2006 at the Winfield Funeral Home in Albia with the family present from 2-4 P.M. and 6-8 P.M. on Sunday. The casket will be closed. A memorial has been established to Hospice of Monroe County.

The family of Helen L. Woodard created this Life Tributes page to make it easy to share your memories.

Send flowers to the Woodard family.