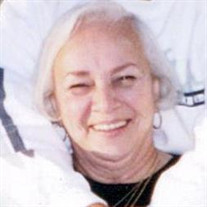 Helen Maynard, age 89, of Albia, passed away on Monday, December 17, 2018, at Oakwood Specialty Care Center in Albia. Helen was born on February 25, 1929, in Paterson, New Jersey to Louis and Vera (Routsis) Peters. She married JB Maynard on April 9th, 1968, in Las Vegas, NV. JB preceded her in death on June 27th 2013. Helen graduated from Browne’s Business School in Long Island, New York, and from Marinello School of Beauty in 1985. Helen spent most of her adult life living in California before coming to Iowa to live near her family. Helen enjoyed traveling, antiquing, gardening, and sewing. Above all, she loved spending time with her grandchildren. Helen is survived by 5 children, Linda (Gary) Brubaker of Utah, Raymond Endonino of Las Vegas, NV, Paula Sheets of Indianapolis, IN, John (Sandy) Stafford Endonino of Albia, IA and Ronald Maynard of Gypsum, CO; 7 grandchildren, Jennifer, Kathy, Alex, Allysa, Lynnann, Chelsea, and Alani; 3 special great-granddaughters, Catelin, Jasmine, & Isabelle Endonino; a sister, Rita Lee and a brother, Johnny Peters, both of Florida. She is preceded in death by her husband, JB Maynard; her parents, Luis and Vera; a brother, George Peters; and 5 sisters, Sofie Pananago, Margie Cirielli, Marie Lambert, Jeanne Hayes, and Patricia Peters in infancy. Per Helen’s wishes, her body has been cremated and no formal services will be held. A private family burial will be held at a later date when Helen will be buried next to her husband at Eslinger Cemetery in rural Monroe County.

The family of Helen Maynard created this Life Tributes page to make it easy to share your memories.

Helen Maynard, age 89, of Albia, passed away on Monday, December...

Send flowers to the Maynard family.