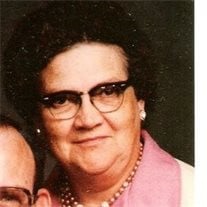 Helen L. Masick, age 88, of Lovilia, Iowa died Tuesday, August 21, 2007 at the Lucas County Health Center in Chariton, Iowa. She was born October 23, 1918 in Monroe County, Iowa in a coal mining town of Won'lock to Joseph Henry and Lillie Mae (Williams) Watters. She married Frank A. Masick, Sr. on February 7, 1942 in Burlington, Iowa by Monsignor Cullinan. Frank passed away on July 17, 1981. Helen attended Attica High School, class of 1937. During WWII she worked for the Day and Zimmerman Ordinance Plant from 1941 - 1945 as a certified shell pourer. Helen received the Army/Navy "E Award", (Excellence Award). Frank and Helen moved back to Lovilia in 1946 where she was a homemaker taking care of their son, Frank, Jr. She was a former member of St. Paul's Catholic Church in Burlington and current member of St. Peter's Catholic Church in Lovilia. Helen was extremely proud of her coal mining heritage and being a coal miner's daughter and her service during the War efforts at the Ordinance plant. Helen is survived by one son, Frank Masick, Jr. of Lovilia and one sister, Betty Billingsley of Pleasant Hill, Iowa. Her parents, husband, three sisters, Dorothy Maddison, Alberta Bernice Watters and Wilma Colleen Watters, two brothers, Donald Leroy Watters and Thomas Edward Watters precede Helen in death. Funeral services will be held at 10:00 A.M. Friday, August 24, 2007 at St. Peter's Catholic Church in Lovilia with Revs. Robert Lathrop and Scott Lemaster officiating. Burial will follow in the Woodlawn Cemetery in Lovilia. Visitation will open after 2:00 P.M. Thursday, August 23, 2007 at the Winfield Funeral Home in Albia, Iowa with a Rosary service at 5:30 P.M. and a Vigil service at 7:00 P.M. Thursday evening. The family will be present until 8:00 P.M. at the funeral home. An Open Memorial has been established.

The family of Helen L. Masick created this Life Tributes page to make it easy to share your memories.

Send flowers to the Masick family.