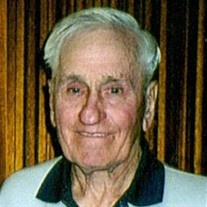 Harold Paul Parker, age 95, of rural Albia, passed away on Easter Sunday, April 16, 2017 at Mercy Medical Center in Des Moines. Harold was born August 18, 1921, in Bussey, Iowa to Edward Henry and Marie Martha (Vander Linden) Parker. He was the 6th of 10 children. He grew up on a farm northwest of Bussey and graduated from Bussey High School Class of 1939. Harold worked on the farm and in a coal mine until he joined the United States Army Air Corp in the spring of 1943. He served his country as a belly gunner during World War II. On January 28, 1945, Harold married Della Ruth Roorda at the Harvey Methodist Church in Harvey, Iowa. They were blessed with 65 years of marriage and five daughters. Harold worked at the VA Hospital in Knoxville from 1946 -1979. In 1966, he went back to school and graduated from the nursing program at Indian Hills Community College. In 1981, Harold received his certificate in Auto Mechanics from Indian Hills Community College and opened H&R Repair, Harold and wife Ruth also farmed. Harold attended church at the Albia Baptist Temple, and was a member of the American Legion in Albia. Harold is survived by his 5 daughters, Patricia Carter of Marion, Dorothy (Don) Engelking of Knoxville, Dixie Harnden of Des Moines, Mary Ann (Donald) Schramm of Russell, and Bonnie (Randy) Williams of Eddyville; 13 grandchildren; 8 step grandchildren; 22 great grandchildren; and 6 step great grandchildren; and 6 great-great grandchildren. Harold is also survived by two sisters; Josephine Exline of Chariton, Viola (Francis) Faust of Winterset and a sister-in-law, Barbara Parker of Jupitar, New Mexico and several nieces, nephews and a host of other family and friends. Harold is preceded in death, by his wife, Della Ruth Parker; his parents, Edward and Marie Parker; a grandson, John Major, a step granddaughter, Sabrina; seven siblings, Leona Dean, Mabel Harlow, James Parker, John Wesley Parker, Floyd Parker, Roy “Shorty” Parker and Marion Edward Parker. Funeral services will be held at 10:30 a.m., Saturday, April 22, 2017, at the Albia Baptist Temple in Albia, with Pastor Brian Harris officiating. Burial with military rites provided by the American Legion of Albia, Melrose and Lovilia will follow the service at the Union Chapel Cemetery north of Albia. Visitation will be held from 1:00 p.m. until 8:00 p.m., Friday, April 21, 2017, at the Tharp Funeral Home in Albia, with Harold’s family present from 5-8 p.m. to greet family and friends. A Memorial has been established to the Albia Baptist Temple.

The family of Harold Paul Parker created this Life Tributes page to make it easy to share your memories.

Send flowers to the Parker family.