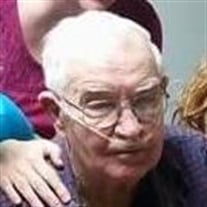 Harold “Fuzz” Robert Hopkins, age 88, of Albia, passed away Sunday, August 14, 2016, under the care of Care Initiatives Hospice at his residence in Albia. Harold was born March 23, 1928, in Mapleton, Iowa to Joseph and Nellie Mae (Bridgeman) Hopkins. Harold attended school in Drakesville, Iowa. After school Harold married Elaine Pauley on June 10, 1950, in Onawa, Iowa. To this union 7 children were born, Kay, Jackie, Robert, Dixie, Robin, Johnny, and Kim. Harold worked construction for most of his working life. He worked for Art Nelson for 32 years as a bridge foreman and also worked for Monroe County as a bridge foreman and inspector. He was a past member of the Eagles and Leisure Lounge of Albia. Harold enjoyed being outdoors, fishing, deer hunting, camping, mushroom hunting, bowling, and being on the Red River. His real joy in life was spending time with his friends and family, especially his grandchildren. Harold is survived by his wife of 66 years, Elaine Hopkins of Albia; his children, Kay (Marvin) Wimmer of Mapleton, Iowa, Jackie Kilbane of Des Moines, Robert (Sherry) Hopkins of Swaledale, Dixie (Jim) Jerasa of Lockridge, Robin (Jim) Gailey of Pella, Johnny Hopkins of Albia and Kim (Roger) Showers of Albia; 13 grandchildren; 15 great-grandchildren; 4 great-great-grandchildren; 2 brothers, Joe Hopkins of Ottumwa and Raymond Hopkins of Albia; 3 sisters, Diane Miller, Charlene Murphy, and Nancy Fabert all of Albia. Harold is also survived by many nieces, nephews, cousins, and friends. Harold is preceded in death by his parents; Joseph and Nellie Mae Hopkins; a granddaughter, Janiece Hopkins, 5 brothers; Kenny, Ronnie, Jim, Bill and Jack Hopkins; 2 sisters, Patty Hopkins and Mary Helen Wright and a son-in-law, Robert Kilbane. A visitation will be held at the Tharp Funeral Home in Albia, IA from 4:00 to 8:00 on Thursday, August 18, 2016, with Harold’s family present from 6:00 to 8:00 A memorial service will be held at a future date. A memorial has been established to Care Initiatives Hospice

The family of Harold "Fuzz" Robert Hopkins created this Life Tributes page to make it easy to share your memories.

Send flowers to the Hopkins family.