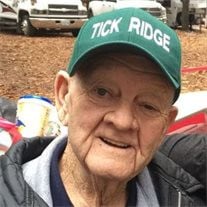 Harold Joseph Conway, age 79, passed away Wednesday, April 27, 2016, at his home in Albia. He had recently lost his beautiful wife of sixty years, and is believed to have died of a broken heart. Harold was born on June 20, 1936 at home on the farm in Melrose to Michael David "MD" and Hannah (Hannam) Conway. He graduated from Melrose High School with the class of 1954. On October 12, 1957, he was united in marriage to Margie Coady at St. Patrick's Catholic Church in Melrose. To this union 4 children were born, Carrie, Lori, Amy, and Alice. He had always claimed to have five daughters, with Carrie Welsh Gray being his youngest. Harold was a cattle farmer, and worked many years as a truck driver. He worked for Vic Phippen, Star Coal, and Prentice Trucking out of Phoenix, AZ., and later retired from Foodliner. Harold was a member of St. Patrick's Catholic Church in Melrose and later a member of St. Mary's Catholic Church in Albia. He was a proud member of the Knights of Columbus, where he was a 3rd degree Knight. He was very proud of his Irish heritage and proud to be from Melrose. He was an Irish, Catholic, Democrat (not necessarily in that order, but always all three). He worked with his brother George in their younger years to help promote the development of land around Lake Rathbun, and joined efforts with The National Farmers Organization. He loved boating and camping, and was dedicated to keeping the family together by organizing the annual "Conway Splash." He was an uncle to over 60 nieces and nephews and adored by all of them. As a young man, he enjoyed flying and had the opportunity to navigate many solo flights. He loved to "tinker" at his shop, and could fix anything. He enjoyed playing cards each week with his buddies in Melrose, and taking road trips with his good friend Denny Ballalatak. He enjoyed a stiff breakfast drink at the lake, and loved Willie, Cash, and Merle. He lived for his family, and adored children. He would help anyone in need, and was a loving and caring husband, father and grandfather. Harold is survived by his 4 daughters, Carrie Andrew, Lori Conway, Amy Dillard, and Alice Shepard; 10 grandchildren, Callie (Beau), Sarah, Josh, Joe, Beau, Coady, Jake (Eryn), Luke, Mary Hannah, and Sam Conway. He is also survived by his brother George (Jennie) Conway, and sisters Marge Graham, Dolores (Bill) McDowell. He was preceded in death by his wife, Margie; his parents, sisters Mary Sullivan, Cecelia Paasch, Ellen Scott, and brothers Henry, Donald, James, John R., and Charles in infancy. A Mass of Christian Burial will be held at 11:00 a.m., Monday, May 2nd 2016, at St. Patrick's Catholic Church in Melrose, with Father Michael E. Volkmer C.P.P.S. officiating. As was his wish, his body will be cremated following the service and a private family burial will take place at Mt. Calvary Cemetery at a later date. Visitation will be held from 3:00 p.m.-8:00 p.m. Sunday, May 1st, 2016, at St. Patrick's Catholic Church in Melrose, with Harold's family present throughout. A rosary will be held at 6:00 p.m. and a wake service will be held at 6:30 p.m.

Harold Joseph Conway, age 79, passed away Wednesday, April 27, 2016, at his home in Albia. He had recently lost his beautiful wife of sixty years, and is believed to have died of a broken heart. Harold was born on June 20, 1936 at home on the... View Obituary & Service Information

The family of Harold Joseph Conway created this Life Tributes page to make it easy to share your memories.

Send flowers to the Conway family.