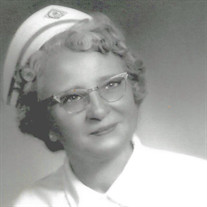 Grace (Dicks) Bloodsworth, age 97, of Albia, passed away peacefully on August 29, 2016, at Oakwood Nursing and Rehabilitation Center in Albia. Grace was born at Hynes, Iowa on December 22, 1918 to William and Emma (Henderson) Dicks. She attended school in Avery and Albia High School. On February 29, 1936 she was married to Harry F. Bloodworth, who preceded her in death. Grace loved helping people, and became a licensed practical nurse in 1967. She worked at St. Joseph’s Hospital in Ottumwa for 7 years, then went to work at McCord Manor nursing home in Albia (currently known as Oakwood Specialty Care). She welcomed the first patient to enter the 96 bed facility. Grace loved to cook for her family, who especially loved her pies and her beef-n-noodles, as well as countless loaves of bread for family gatherings. In early years she crocheted and knit, and later on made beautiful quilts for everyone in the family. She will be sorely missed. She is survived by her son, Richard L. (Rosemary) Bloodsworth, by her daughter, Shirley Ferraro (Joseph); two sisters Margaret Ellis and Janice Dicks; 5 grandchildren, Jacob and Tony Shope, Wendy Weeks, Richard Bloodsworth, jr. and Ross Bloodsworth. She had 8 great grandchildren, Katie Sipek, Emma Shope, Alli Shope, Sadie Shope, Hannah Boehm, Sarah weeks, Claire Weeks, and Joshua Bloodsworth. Grace is also survived by many loving nieces and nephews. A visitation will be held at the Tharp Funeral Home in Albia, on Saturday, September 3, 2016 from 9:00 a.m. - 11:00 a.m. with Grace’s family present. Funeral Services will be held at 11:00 a.m., Saturday, September 3. 2016 at the Tharp Funeral Home in Albia, with Pastor Richard Grimes officiating. Burial will follow service at Pleasant Corners Cemetery in rural Albia. Our thanks to the staff of Oakwood and to Care Initiatives Hospice Care for their loving attention to Mom and to our family’s needs. A memorial has been established to the Alzheimer’s Association.

The family of Grace (Dicks) Bloodsworth created this Life Tributes page to make it easy to share your memories.

Send flowers to the Bloodsworth family.