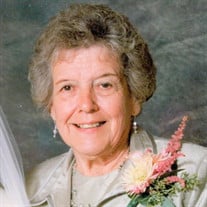 Gloria Joyce Patton, age 93, of Albia, formerly of Des Moines, passed away on Thursday, October 29, 2020, at the Oskaloosa Care Center in Oskaloosa, Iowa. Gloria was born on October 7, 1927, to William Thomas and Rebecca Helen (Conway) Gray in Kansas City, MO, where she attended school and graduated from high school. On February 28, 1948, she was united in marriage to Roy Webster Patton in Independence, MO. They moved to Des Moines in 1959, where they spent many years before moving to Albia in 2006. Gloria and Roy shared 58 years of marriage prior to Roy’s passing on November 8, 2006. Gloria worked in the cafeteria in the Des Moines schools before doing clerical work for Central National Bank and RG Dickinson. She was a very active member of the First Presbyterian Church where she was a deacon and a Sunday school teacher. Gloria and Roy assisted their children at the YMCA with chorus and bell ringing. Gloria enjoyed being outdoors, gardening and cooking. She loved animals, especially taking care of Renee’s dogs. She also loved spending time with her family and friends. Gloria is survived by her children, Renee (Mark Knowles) Patton - Knowles and Randy Patton; a brother William G Gray, and a sister in law, Jean Gray. She is also survived by two grandchildren, several nieces and nephews, cousins and good friends. She was preceded in death by her husband, Roy; her parents, William and Rebecca Gray; and 4 siblings, Donald, Norman, a brother in infancy, and a sister in infancy. Per Gloria’s wishes, her body has been cremated and no services are planned. A memorial has been established to the Animal Rescue League. Memorials/cards of condolences can be directed to Renee Patton-Knowles at 304 4th Ave. East, Albia, IA 52531.

The family of Gloria Joyce Patton created this Life Tributes page to make it easy to share your memories.