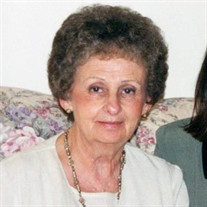 Glenda Carole (Binns) Gibson, age 86, of Guthrie Center, passed away on Saturday, April 11, 2020, at the Spurgeon Manor in Dallas Center, Iowa. Glenda was born on December 14, 1933, in Eddyville, Iowa to Mary and Verne Binns. She grew up in Eddyville and graduated from Eddyville High School in 1951. She married Marvin Perry and 4 children were born to this union, Cynthia, Bart, Rodney, and Timothy. Glenda was an independent woman earning her Licensed Practical Nursing degree (LPN) in 1970. She worked at the Knoxville and Des Moines V.A. Medical Center until her retirement. Early in life, she enjoyed playing and coaching girls softball. She and her friend Mary Lou Reinhart were instrumental in forming the first girls softball league in Monroe County. She was an Iowa State basketball fan as well. Glenda enjoyed camping with her grandson Devin and visiting her two grandsons Lucas and Logan in Brenham, Texas. In 1988, she met and married Lee Gibson. They spent 30 wonderful years living in Guthrie Center, Iowa where she worked part-time at the Strawberry Patch and Prime Time Restaurant. She is survived by her daughter, Cynthia Custer of Brenham, Texas; a son Rod Perry and wife Janice Clark of Russell, Iowa; and grandchildren Kelli, Barton, Trevor, Lucas, Logan, and Devin. Glenda is also survived by 4 sisters and 2 brothers. Glenda is preceded in death by her parents, Mary and Verne Binns; two children, Bart and Timothy; and a sister, Yvonne Gray. Due to the current State of Public Health Disaster Emergency (COVID-19), no visitation is planned at this time. A private family graveside service will be held on Tuesday, April 14, 2020, at Highland Cemetery in Eddyville. Memorials in memory of Glenda may be sent to the Eddyville Historical Committee at P.O. Box 291, Eddyville, Iowa 52553.

Glenda Carole (Binns) Gibson, age 86, of Guthrie Center, passed away on Saturday, April 11, 2020, at the Spurgeon Manor in Dallas Center, Iowa. Glenda was born on December 14, 1933, in Eddyville, Iowa to Mary and Verne Binns. She grew... View Obituary & Service Information

The family of Glenda Carole (Binns) Gibson created this Life Tributes page to make it easy to share your memories.