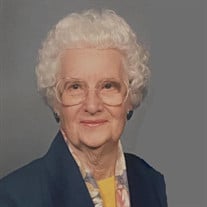 Gladys Marian Grimes joined her beloved husband David and other family members and the Savior she loved so much, Tuesday, October 27, 2020, at Northern Mahaska Specialty Care in Oskaloosa with her son Richard at her side. She was just five... View Obituary & Service Information

The family of Gladys Marian Grimes created this Life Tributes page to make it easy to share your memories.

Gladys Marian Grimes joined her beloved husband David and other...