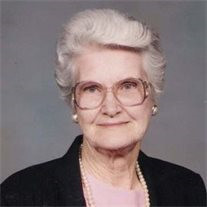 Geraldine Charlotte Mefford, age 90, of Albia, Iowa died Tuesday, August 8, 2006 at Monroe Care Center in Albia. Gerladine was born July 9, 1916 in the Consol Coal Camp in Monroe County, Iowa to John and Belle (Hughbanks) Schoolen. She married Irven Mefford in 1945. Irven died in November of 1986. Geraldine attended the Lemon School in Lovilia, and later worked for Chamberlain Manufacturing and Behnkes in Albia. Geraldine was also a member of the Trinity United Methodist Church. Geraldine is survived by her nephew, John Schoolen (Glenda) of Albia; and her niece, Marian Schoolen Crall (Bernard) of Des Moines, both of whom she raised. Geraldine is also survived by many other nieces, nephews, great-nieces and nephews, and great-great nieces. She was preceded in death by her parents; her husband, Irven; five sisters, Marquerite Lemons, Mary Schoolen, Pauline Voll, Wilma Schoolen, and Catherine Darby; and one brother, Merle Schoolen. Funeral services will be held at 10:30 A.M., Friday, August 11, 2006, at the Trinity United Methodist Church in Albia, with Rev. Kevin Leveck officiating. Burial will follow services at Woodlawn Cemetery in Lovilia. Visitation will begin at 2:00 P.M., Thursday, August 10, at the Winfield Funeral Home in Albia with the family present from 6-8 P.M., Thursday evening. Memorials have been established to the Trinity United Methodist Church.

The family of Geraldine Charlotte Mefford created this Life Tributes page to make it easy to share your memories.

Send flowers to the Mefford family.