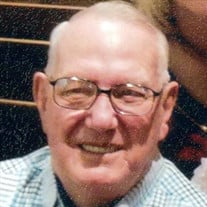 Gerald “Jerry” Chester Peterson, age 84, of Albia, passed away October 28, 2016 at the Iowa Veterans Home in Marshalltown, Iowa. He was born December 22, 1931 to Henry and Vera (Allison) Peterson in rural Monroe County. He grew up and graduated from the Lovilia High School with the Class of 1949. On October 29, 1954 he was united in marriage to Maxine Gillette at the Methodist Church in Albia. Gerald was a full time farmer his entire life but also worked at Morrells before he joined the United States Army and served his country doing the Korean War. After returning home he continued farming and worked for the Chicago Rivet Factory where he was a machinist. Gerald enjoyed being outdoors, woodworking and family cookouts. He was a talented craftsman and could accomplish anything he set his mind to. His real joy in life was spending time with his family and friends. Gerald is survived by his wife of 62 years, Maxine Peterson; his daughter, Vicki Colwell; four sons, Dennis Peterson, Dave (Carol) Peterson, Curtis (Kaylene) Peterson and Merrill (Melissa) Peterson, 11 grandchildren, Kelli, Kari, Eric, TJ, Jeremy, Katlyn, Daniella, Dalton, Kylie, Makenzie, and Abby and many great grandchildren; his sister, Donna Post; his brother, Harold “Pete” (Sharon) Peterson, a sister-in-law, Mary Peterson; and several nieces and nephews. He was preceded in death by his parents, Henry and Vera Peterson; his brother, Walter “Jack” Peterson; and a grandchild, Skyler Reid Peterson. Visitation will be held from 1:00 p.m. to 8:00 p.m. Tuesday, November 1, 2016, at Tharp Funeral Home in Albia, with Gerald’s family present throughout the day. As was Gerald’s wish, his body will be cremated and a private family burial with military rites will be held at a later date. Memorials have been established to the Welcome Home Soldier Memorial in Albia or to the family’s wishes. Condolences may be left for the family at www.tharpfh.com.

The family of Gerald "Jerry" Chester Peterson created this Life Tributes page to make it easy to share your memories.

Send flowers to the Peterson family.