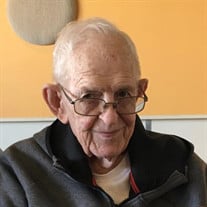 Gerald “Jerry” Lee Mosbey, age 86, of Albia, passed away on Tuesday, June 3, 2020, at Homestead Assisted Living in Albia. Jerry was born on November 16, 1933, on the family farm in Monroe County to William Edward and Ruth Bernice (Mertz) Mosbey. He attended country school and later the Albia High School, graduating with the Class of 1952. Jerry married Ruth Arlene Nickelson on April 26, 1954, at the First Christian Parsonage in Albia. To this union, 2 daughters were born, Rhonda Rae and Brenda Lee. Jerry and Ruth shared nearly 61 years of marriage prior to Ruth’s passing on March 13, 2015. Jerry was drafted in 1956 into the United States Army. He did his basic training in Colorado Springs and then was later stationed in Germany. He became the care taker for their lion mascot, first for Charlie 1 and later for Charlie II. Jerry had many occupational experiences. He grew up delivering papers and special delivery mail. He worked at McClellan’s in Albia stocking candy and later at Hess Drug. He then went to work at Maytag and lastly at Kness Manufacturing in Albia where he was a foreman and then plant manager before retiring after more than 40 years of working there. Jerry was a very gentle, patient, kind, and organized man, who was also extremely talented in many different areas. He could work on anything from cars to remodeling and building homes. He took a correspondence course in upholstery. He was an exceptional woodworker who made all kinds of furniture, dining room tables, hope chests, rocking chairs, and rocking horses, cars, and toys for his grandchildren. Jerry was always willing to help others, enjoyed volunteering at the Albia Museum and was a lifetime blood donor. He helped hang the Christmas lights on the Albia square with the Jaycees. He worked on the pit crew for Leo Durbala’s stock race car. Jerry delighted in attending the extracurricular activities of his daughters, grandchildren, and eventually, great grandchildren. He enjoyed reading, attending the Old Thresher’s Reunions in Mount Pleasant, and traveling to places such as Hawaii, Maine, Florida, and World Fairs in many different states. Above all else, Jerry enjoyed spending time with his family and friends. Jerry is survived by his two daughters, Rhonda Rae (Kerry) Kness of Norwalk and Brenda (Jim) Wynn of Albia; six grandchildren, Brynn (Colin) Eveland, Jordan (Alyssa Brookhart) Kness, Greg (Sara) Wynn, Sarah (Sean) Hollonbeck, Carrie (Chad) Hollerud, and Kevin (Kailey) Wynn; ten great-grandchildren, Jace, Koltin, Daphne, Maximus, Kemper, Otis, Chip, Henley, Harper, and Elias; a sister, Bonnie Hunt; and a brother, Ben Mosbey. Jerry is also survived by many nieces, nephews, cousins and good friends. He was preceded in death by his wife, Ruth; his parents; Edward and Ruth Mosbey; and a brother, Bill Mosbey. Visitation will be held from 3:00 p.m.-8:00 p.m., Sunday, June 7, 2020, at the Tharp Funeral Home in Albia, with Jerry's family present from 6:00-8:00 p.m. Funeral services will be held at 10:30 a.m., Monday, June 8, 2020, at the First Christian Church in Albia, with Pastor Lynda Carlson officiating. Burial with military rites provided by the American Legion of Albia, Melrose and Lovilia will follow services at Oak View Cemetery in Albia. A memorial has been established to the Monroe County Historical Museum in Albia or the Welcome Home Soldier Monument in Albia.

The family of Gerald "Jerry" Lee Mosbey created this Life Tributes page to make it easy to share your memories.

Send flowers to the Mosbey family.