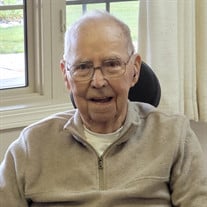 Gerald Dean Conner, age 88, of Albia, IA, formerly of Lovilia, passed away on Monday, February 28, 2022, at his home in Albia. Gerald was born on November 14, 1933, at home in Chariton to Earl and Jennie (Hunt) Conner. He grew up attending school in Chariton. Following school, Gerald served his country in the United States Air Force from 1953-1957 as an air craft mechanic stationed in Korea, Alaska, and Texas. On October 25, 1958, Gerald was united in marriage to Janet Waters at the Methodist Church in Knoxville, IA, and to this union, 2 daughters, Shelly and Sandra, were born. Gerald and Janet shared 63 years of marriage prior to his passing. Upon returning home from the service, Gerald did construction work at Booth and Olsen. He then went to work at Franzen Trucking, before owning and operating the APCO station, and later the Sinclair station. Lastly, Gerald worked in the service department at Duea Motor Company in Albia. Gerald enjoyed being outdoors, fishing, and camping. He and Janet enjoyed traveling and wintered in Texas. He loved Nascar racing and was an avid Dale Earnhardt fan. Gerald was a very talented mechanic and loved to work on things, especially cars. His true joy in life was spending time with his family and friends, especially his daughters and grandchildren. Gerald is survived by his wife, Janet; 2 daughters, Shelly (Tom) Shultz and Sandra (Roger) Reed; 7 grandchildren, Sarah (Travis) Graham, Ryan (Audrie) Beary, Curt (Jessica) Beary, Scott (Ronda) Reed, Kelly (Ariel) Reed, Kerry Reed, and Kasey (Lea) Reed; 11 great grandchildren; a brother, Ronald (Judy) Conner; 2 brothers-in-law, Lewis Darrah and Ray Mosbarger; and a brother and sister-in-law, Larry (Armadine) Schmitt. Gerald is also survived by many nieces, nephews, cousins and good friends. He was preceded in death by his parents, Earl and Jennie; 5 siblings, Clyde (Margaret) Conner, Cecil (Viola) Conner, Donald (Phyllis) Conner, Elmer (Beverly) Conner, and Connie Darrah; his parents-in-law, Pat and Iva Waters; and a brother and sister in law, Marvin (Haydee) Waters. Visitation will be held from 2:00 p.m.-7:00 p.m. on Wednesday, March 2, 2022, at the Tharp Funeral Home in Albia, with Gerald’s family present from 4:00 p.m.-7:00 p.m. to greet family and friends. Funeral Services will be held at 10:30 a.m., Thursday, March 3, 2022, at the Tharp Funeral Home in Albia, with Pastor Richard Grimes officiating. Burial with military honors provided by the American Legion of Albia, Lovilia, and Melrose will follow services at Woodlawn Cemetery in Lovilia, IA. An open memorial has been established to the family.

Gerald Dean Conner, age 88, of Albia, IA, formerly of Lovilia, passed away on Monday, February 28, 2022, at his home in Albia. Gerald was born on November 14, 1933, at home in Chariton to Earl and Jennie (Hunt) Conner. He grew up attending... View Obituary & Service Information

The family of Gerald Dean Conner created this Life Tributes page to make it easy to share your memories.

Send flowers to the Conner family.