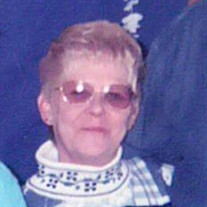 Georgina “Georgie” Ann Sebben, age 72, of Albia, passed away on Monday, March 9, 2020, at Mercy Hospital West Lakes in Des Moines, IA. She leaves behind her beloved daughter, Theresa “Tess” Sebben of Albia. Georgie was born on October 18, 1947, to George T. and Gertrude T. (Sinclair) Koffman in Melrose, IA. She grew up in Melrose and graduated from Albia Community High School in 1965. On March 27, 2004, Georgie married Tony Sebben of Albia, IA, the love of her life. In her younger years, Georgie lived in Chariton, working at the nursing home and the Country Chef and trying to raise her daughter by herself. In the early 1970’s, she started the café in Melrose. Her daughter, her sister, Mary, and mom worked daily together there until the floods of 1982-83 ended it. She then started working at the White Buffalo bartending, waiting tables and loving every minute of it. She continued this after retirement. She loved Peter and Lisa Greiner and those kids, always saying, “Give Grandma a hug! In 1985, Georgie started working for the Iowa DOT Maintenance Division in Albia, where she worked for 25 years, and loved blading snow. Georgie loved her home and her fur babies and even had Tony build on more room for them. In her spare time, she would go to the casinos to play penny machines, both winning and losing, but they were having fun so it didn’t matter. Georgie is survived by a daughter, Tess Sebben of Albia and a sister, Mary Chapman of Chariton. She was preceded in death by her parents, George and Gertrude Koffman; her husband, Tony Sebben; 3 brothers, John, James, and Thomas Koffman; and brother-in-law, George Chapman. Visitation will open with a rosary led by St. Mary’s Altar and Rosary Society at 4:00 p.m. and will be held until 8:00 p.m., Thursday, March 12, 2020, at the Tharp Funeral Home in Albia, with Georgie’s family present to greet family and friends. A memorial service will be held at 11:00 a.m., Friday, March 13, 2020, at the Tharp Funeral Home in Albia, with Father Felix Onuora, C.S.SP. officiating. A private family burial will be held at a later date. In lieu of flowers, a memorial has been established to the Heartland Humane Society in Ottumwa. Anyone who wishes may bring supplies to be donated to the Humane Society.

The family of Georgina "Georgie" Ann Sebben created this Life Tributes page to make it easy to share your memories.

Send flowers to the Sebben family.