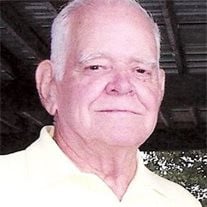 George William "Sie" Havelock, age 86, of Hiteman, Iowa died Thursday, October 12, 2006 at the Oakwood Nursing & Rehabilitation Center in Albia. He was born August 25, 1920 in Hiteman to George William and Katherine (Higgins) Havelock. He married Maxine Hoover on December 24, 1953 in Unionville, Missouri. She passed away on January 9, 2000. George attended Hiteman schools. He was a veteran serving in the U.S. Army during World War II and the Korean Conflict. He was a Prisoner of War in Korea for 33 months and 11 days. George retired from the U.S. Army and from the City of Anchorage, Alaska. He was a member of the Howard Cessna Post No. 136 American Legion, the Grimes Memorial Post No. 8190 VFW, the 40/8 Club, DAV and the Albia Eagles AERIE No. 3583. George is survived by one son, Frank (Janis) Havelock of Surprise, AZ and one daughter, Kay (Sam) Trujillo of Palm Desert, CA; 4 grandchildren and 4 great grandchildren. Also surviving is a niece, Patty Gray of Albia along with several other nieces and nephews. He was preceded in death by his parents; his wife; one granddaughter, Kim Havelock and 8 siblings. Funeral services will be held at 11:00 A.M. Monday, October 16, 2006 at the Winfield Funeral Home in Albia with Rev. William Walter officiating. Burial with Military Rites conducted by the United States Army Color guard, the VFW and American Legion will be in the Hiteman Cemetery in Hiteman, Iowa. Visitation will begin Sunday, October 15, 2006 at 12 P.M. (noon) at the Winfield Funeral Home in Albia with the family present from 6-8 P.M. that evening. There will be a 4:00 P.M. Rosary service and a 6:30 P.M. Christian Wake service Sunday at the funeral home. Memorials have been established to the Hiteman Cemetery and Park.

The family of George William Havelock created this Life Tributes page to make it easy to share your memories.

Send flowers to the Havelock family.