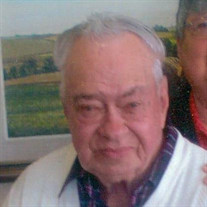 Gene Charles Kline, age 84, of Melrose, passed away on June 10, 2018, under the care of HCI Hospice at the Monroe County Hospital in Albia, surrounded by his loved ones. Gene was born on February 16, 1934, to Ellsworth Sr. and Nellie (Auxter) Kline on the family farm in Monroe County. He grew up and graduated from the Albia High School with the Class of 1954. He was united in marriage to Wilma Smith in 1954, in Chariton, Iowa. To this union 3 children were born, Allen, Dwayne and Dale. Gene and Wilma later divorced. On May 10, 1974, he was united in marriage to Helen Franklin in Unionville, Missouri. To this union a son, Steve, was born. Gene worked at Maytag in Newton before taking a job at Maloney’s which later became Chamberlain’s in Albia. He then went to work for the Russell Sale Company before retiring in 2009. After retirement, Gene spent his time farming and mowing the fair grounds. He later sold the farm and helped farm for Larry McCarty. Gene was on the Monroe County Fair Board for 14 years and was inducted into the 4-H Hall of Fame in 2012. Gene enjoyed life. He enjoyed reading Louis L’Amour western novels, watching westerns, Hee-Haw and the Lawrence Welk Show and listening to Guy Lombardo. He also enjoyed being outdoors, fishing, pheasant and coon hunting and going for rides in his pick-up. Above all he enjoyed spending time with family and friends, especially his grandchildren. Gene is survived by his wife of 44 years, Helen Kline of Melrose; his sons, Allen (Lee) Kline of Calamus, IA, Dale (Tess) Kline of Knoxville and Steve (Haley) Kline of Albia; 10 grandchildren, Jennifer, Melissa, Michael, Brandy, Luke, Amber, Kristopher, Andrew, Tegan and Tucker and 8 great grandchildren, Jamian, Brecken, Macklin, Grayson, Hollyn, Brayden, Colby and Nicole. He is also survived by several nieces, nephews, cousins and good friends. He is preceded in death by his parents, Ellsworth Sr. and Nellie Kline; a son, Dwayne Kline; a brother, Ellsworth Jr. and 2 sisters, Barbara and Alberta. Visitation will be held from 2:00 p.m. until 8:00 p.m., Wednesday, June 13, 2018, at the Tharp Funeral Home with Gene’s family present from 5:00 p.m.-8:00 p.m. to greet family and friends. Funeral services will be held at 10:30 a.m., Thursday, June 14, 2018, at the Tharp Funeral Home in Albia with Pastor Lynda Carlson officiating. As was Gene’s wish, cremation will follow the funeral service and a private family burial at the Hiteman Cemetery will be held at a later date. An open memorial has been established to the family and will be determined at a later date.

Gene Charles Kline, age 84, of Melrose, passed away on June 10, 2018, under the care of HCI Hospice at the Monroe County Hospital in Albia, surrounded by his loved ones. Gene was born on February 16, 1934, to Ellsworth Sr. and Nellie (Auxter)... View Obituary & Service Information

The family of Gene Charles Kline created this Life Tributes page to make it easy to share your memories.

Send flowers to the Kline family.