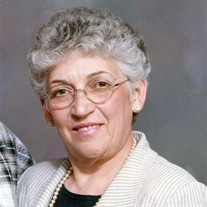 Gayle Louella Hastings, age 79, of Lovilia, IA, passed away on Friday, January 10, 2020, at the Monroe Care Center in Albia. Gayle was born on February 27, 1940, on the family farm in Monroe County near Lahart Lake, to Vern and Pearl (Barnhill) Baker. She grew up and attended country school and later graduated from the Lovilia High School with the Class of 1958. On July 12, 1959, she married John Hastings at the Lovilia United Brethren Church. Gayle and John were blessed with 4 children and shared over 49 years of marriage prior to John’s passing on December 20, 2008. Gayle worked as a teller at First Iowa State Bank in Albia before going to work for the City of Lovilia at the pump house where she was the clerk who wrote water bills. She then went to work at Chicago Rivet in Albia in 1976 until her retirement in 2002. Gayle also served Senior Meals for many years. Gayle was a member of the Lovilia United Brethren Church and later the Lovilia United Methodist Church. She was also a member of the Eastern Star. She and John enjoyed traveling, and even traveled abroad to places such as Scotland, the United Kingdom and Ireland. Gayle enjoyed doing Sudoku puzzles, watching Wheel of Fortune, and going to the casino. She loved attending her grandchildren’s sporting events, dance recitals, and plays. She enjoyed gardening and canning salsa. She was a wonderful cook who loved to prepare meals to share with others. Gayle’s family was everything to her and her true joy in life was spending time with them. Gayle is survived by 3 children, Tom (Susan Wise) Hastings, Mark (Kate) Hastings, and Ed (Karissa) Hastings; 9 grandchildren, Steven Elam, Emily (Austin) Fender, Andrew (Britt) Hastings, Hunter (Kenzie Griffin) Hastings, Taylor Hastings, Jack Hastings, Lily Hastings, Kalea Hastings, and Piper Hastings; 2 great grandchildren, George and Ayanna; 2 sisters, Norma Barnes and Lola Ivins; 4 sisters-in-law, Barb Hastings, Mary Jo Hastings, Betty Baker, and Hazel Baker; and several nieces, nephews, cousins, and good friends. She was preceded in death by her husband, John; a son, Randy Hastings; her parents, Vern and Pearl Baker; a sister, Doris Shelford; 4 brothers, Forrest, Jim, Don, and Merrill Baker; 5 brothers-in-law, Delbert Hastings, Harold Hastings, Jack Shelford, Bob Ivins, and Bill Barnes; and 2 sisters-in-law, Helen Baker and Cleo Baker. Visitation will be held from 2:00 p.m.-8:00 p.m. on Monday, January 13, 2020, at the Tharp Funeral Home in Albia, with Gayle’s family present from 5:00 p.m.-8:00 p.m. to greet family and friends. Funeral services will be held at 11:00 a.m. on Tuesday, January 14, 2020, at the Lovilia United Methodist Church, with Pastor Raymond Doser officiating. Per her wishes, Gayle’s body will be cremated following the service and a private burial will be held at Woodlawn Cemetery in Lovilia at a later date. An open memorial has been established to the family to be determined at a later date.

Gayle Louella Hastings, age 79, of Lovilia, IA, passed away on Friday, January 10, 2020, at the Monroe Care Center in Albia. Gayle was born on February 27, 1940, on the family farm in Monroe County near Lahart Lake, to Vern and Pearl... View Obituary & Service Information

The family of Gayle Louella Hastings created this Life Tributes page to make it easy to share your memories.

Gayle Louella Hastings, age 79, of Lovilia, IA, passed away on...

Customized sympathy cards. Mailed for you.