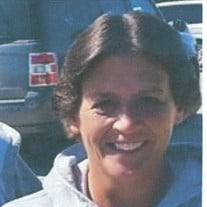 Gail Ilene Anderson, age, 47 of Avery, passed away Tuesday, August 15, 2017, at her home in Avery. Gail was born December 6, 1969 to Ron and Andrea (Welt) DeMoss in Albia, Iowa. She grew up and attended Albia High School. She married Paul Stafford in Blakesburg and to this union a son was born, Daniel. Gail and Paul later separated. She worked at DeLongs in Albia for several years and eventually became plant manager until DeLongs closing. She later took a job as a cook at the North End in Lovilia. Gail enjoyed being outdoors, fishing, reading and traveling. Her real joy in life was spending time with her family and friends, especially the love of her life, Jeff Bates. Gail is survived by her son, Daniel Stafford; two grandsons, Ethan and Nathan; her parents, Ron (Vickie) DeMoss and Andrea (Tom) Woodard; a brother, Lee DeMoss; a sister, Deanna Riley; a step-brother, Harold (Buck) Brink; a step-sister, Mindy Conn and many nieces, nephews, aunts and uncles. She was preceded in death by her true love, Jeff Bates; her grandparents, Ernest Sr. and Odetta DeMoss and Jess and Luella Welt. A memorial service will be held at 10:30 a.m., Saturday, August 19, 2017, at the Tharp Funeral Home in Albia, with Pastor Richard Grimes officiating. Burial will be at Cuba Cemetery following the service. Visitation will begin at 1:00 p.m. until 8:00 p.m., Friday, August 18, 2017, at Tharp Funeral Home in Albia, with Gail’s family present from 5:00 p.m. until 8:00 p.m. Friday evening to greet family and friends. A memorial has been established to the family to help them with the purchase of a monument for Gail. Condolences may be left for the family at www.tharpfh.com.

The family of Gail Ilene Anderson created this Life Tributes page to make it easy to share your memories.