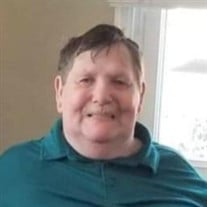 Fred T. Steinaway, age 68, passed away on Thursday, July 2, 2020, at Oakwood Specialty Care in Albia, IA, where he was a resident under the care of EveryStep Hospice. Fred was born on January 22, 1952, in Ottumwa, IA, and lived there with his family until their move to Spanaway, WA when he was just a young boy. He attended Elk Plain Elementary School in Spanaway, and in 1966 they moved to Eatonville, WA where he graduated from Eatonville High School. Fred joined the army after high school and was stationed in California where he continued to live after his discharge. After leaving California, Fred returned to Ottumwa where he lived until his recent move to Albia. During his years in Ottumwa, he worked at JBS Swift and also worked as a roofer and in the construction trades. Fred loved old cars, fishing and country music and could sing along with any Hank Williams song that came on the radio. He was also a WWE fan and would stay up late to watch his favorite wrestlers. Fred had a big heart and a kind soul and loved his family and friends dearly. He is survived by two sisters and their husbands, Margery (Kiso) and Ron Elliff of Puyallup, WA, and Susan (Kiso) and Dustin Frederick of Kirkland, WA; several nieces and their families; cousins; and the family of his loving partner of many years, Christine Comstock who preceded him in death in March. Also preceding him in death are his mother Winona Jo (Jefferson) Kiso and stepfather Albert Kiso; his wife, Carolyn Steinaway; a sister, Susan (Steinaway) Elkins, and a brother, Tom Kiso. No Visitation is planned. A memorial service will be held at 10:30 a.m., Saturday, July 11, 2020, at the Tharp Funeral Home in Albia, with Pastor Chris Harris officiating. Military rites provided by the American Legion of Albia, Melrose and Lovilia will follow services. A private family burial will be held at a later date. A memorial has been established to the American Legion Howard Cessna Post #136 of Albia or the Welcome Home Soldier Monument in Albia.

Fred T. Steinaway, age 68, passed away on Thursday, July 2, 2020, at Oakwood Specialty Care in Albia, IA, where he was a resident under the care of EveryStep Hospice. Fred was born on January 22, 1952, in Ottumwa, IA, and lived there with... View Obituary & Service Information

The family of Fred T Steinaway created this Life Tributes page to make it easy to share your memories.

Send flowers to the Steinaway family.