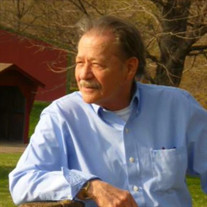 “There was a man who loved his children more than anyone else in the world could love their children… until his children had children” Frank James Hunter Jr., age 67, of Albia, passed away on Wednesday, August 1, 2018, at the Iowa Methodist Medical Center in Des Moines, Iowa surrounded by his loved ones. Frank was born on August 20, 1950 in Des Moines, Iowa, to Frank James Sr. and Norma Jean (Carmichael) Hunter. He grew up in Des Moines and graduated from Lincoln High School with the Class of 1968. After high school, Frank joined the United States Air Force and served his country during the Vietnam War. He was united in marriage to Beth Shanks in Carbondale, Iowa, on July 2, 1982. Frank was a very talented individual that could repair anything. He always had a love for computers and in 2001 he opened Hunter Technologies where he programmed and assembled new computers and fixed older computers. He was a past member of the Masonic Lodge in Runnells, Iowa. Frank never knew a stranger and enjoyed being ornery by telling stories to family and friends and delighted in pulling pranks on them. Above all, his biggest joy in life was spending time with his children and grandchildren. Frank was always level headed and calm no matter any situation. He was a very caring and loving individual who would help anyone in need. Those left to carry on Frank’s memories are his wife of 36 years, Beth Hunter; his 2 children, Frank III (Kelli) Hunter and Kristi (Lee) Francis; his 6 grandchildren, Randy, Taelor and Jenna Francis and Alexis, Madison and Logan Hunter. He is also survived by his mother, Norma; 2 brothers; 4 sisters and many nieces, nephews, cousins, grand nieces, grand nephews and good friends. He is preceded in death by his father, Frank James Hunter Sr. and Lloyd William Van Zuuk and his grandparents John (Lina) Hunter. Prayers will be held at 2:00 p.m., followed by a time of remembrance and sharing on Sunday, August 5, 2018 at the Tharp Funeral Home in Albia with military rites provided by the American Legion of Albia, Lovilia and Melrose. A private family burial will be held at a later date. An open memorial has been established in Frank’s name and will be determined at a later date. Condolences to the family may be left online at www.tharpfh.com.

&#8220;There was a man who loved his children more than anyone else in the world could love their children&#8230; until his children had children&#8221; Frank James Hunter Jr., age 67, of Albia, passed away on Wednesday, August 1,... View Obituary & Service Information

The family of Frank James Hunter Jr created this Life Tributes page to make it easy to share your memories.

“There was a man who loved his children more than anyone else...

Send flowers to the Hunter family.