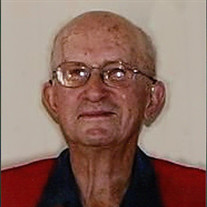 Frank Charles Fairchild, age 95, of Eddyville, passed away on November 27, 2017 at Good Samaritan assisted living Center in Ottumwa. Frank was born August 18, 1922 in Mora, MN to Thomas Carl and Chloe Belle (Abernathy) Fairchild. He graduated from Kirksville High School and attended Carnegie College of Technology in Pittsburg, PA. Frank served his Country in the United States Army during World War II in the European theater, in the battle of the Bulge, France, Belgium and Germany. He was honorably discharged in 1945. He and Myrta Harriger were married in 1947 in Libertyville, IA. Frank worked at John Deere in Ottumwa for 36 years retiring in 1983. He was a member of the American Legion and the Masonic Lodge both of Eddyville. He enjoyed being outdoors, fishing, playing golf and traveling to Brownsville, Texas where they wintered for 27 years. He is survived by his wife of nearly 70 years Myrta of Ottumwa; 2 daughters, Linda (Emil) Larson of Des Moines and Karen (Jim) Ealy of Unionville, IA; 3 grandchildren, Curt Larson, Brandon Lint and Katie Lint; 3 great grandchildren, Kaden, Logan, and Lainey Lint; 4 step-grandchildren, Abby Ealy, Cory (Maggie) Ealy, Kyle Ealy, and Cody (Faith) Ealy and 3 step great-grandchildren, Lillian, Gavin and Jet. Frank is also survived by many nieces and nephews. Frank was preceded in death by his parents, Thomas and Chloe; 2 brothers and 8 sisters. Frank’s body has been cremated according to his wishes and no services will be held.

The family of Frank Charles Fairchild created this Life Tributes page to make it easy to share your memories.

Frank Charles Fairchild, age 95, of Eddyville, passed away on...

Send flowers to the Fairchild family.