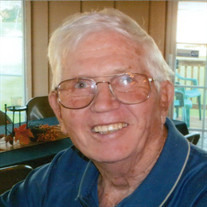 Floyd Eugene Hopkins, age 84, of Albia, passed away on Thursday, January 26, 2017, at the Monroe Care Center in Albia. Floyd was born in Independence, Iowa on February 20, 1932 to Beryl and Mildred (Albert) Hopkins, the oldest of 8 children. He graduated from Rowley High School in 1950. He served in the United States Navy from 1953-1956. After his service to his country, he attended Gates Business College in Waterloo where he met Norma Dawson. They were united in marriage on August 31, 1958. To this union four children were born, Paul, Lori, Scott, and Leigh Ann. Together Floyd and Norma shared 58 years of marriage. Floyd worked at John Deere Product Engineering Center in Waterloo, Iowa and retired in 1985. Floyd was an active member at Grace United Methodist Church in Waterloo, Iowa. He taught Sunday School and was involved with Men’s Club. He went on several mission project trips and enjoyed attending an adult Sunday School class for many years. Many life-long friendships were formed there. After Grace Church closed he attended Kimball Ave. UMC in Waterloo. In 2013 they moved to Albia and attended Trinity United Methodist Church. Floyd enjoyed playing golf, bowling, and pitching horseshoes. He was very proud of his family and The Grout Museum in Waterloo presented the Hopkins family with the Sullivan Award for military family of the year in 2011. Seven of the eight Hopkins children served in the military as well as two brothers-in-law and two nephews. Floyd is survived by his wife, Norma Hopkins of Albia; their children, Paul (Andrea) Hopkins of Savage, MN, Lori (Dave) Yarkosky of Albia, Scott (Becky) Hopkins of Centennial, CO, and Leigh Ann Schwartz of Fort Collins, CO; their grandchildren, Grant Hopkins of Savage, MN, Joe (Stacy) Yarkosky of Spencer, Drew (Meg) Yarkosky of Kearny, MO, Kyli Hopkins of CO, and Bryce Schwartz and Caitie (Nick) Stroh of CO and two great grandsons, Dawson and Edison Yarkosky of Spencer. Floyd is also survived by his brothers Delbert (Sharon) Hopkins of AZ, and Bill (Bunny) Hopkins of Cedar Rapids; two sisters, Louise (Joe) Yoder of Waterloo and Susan (Andy) Bacon of Columbia, IL; one sister-in-law, Annie Hopkins of Brandon, IA; and many nieces and nephews. He was preceded in death by his parents; a grandson, Karter Hopkins; three brothers, Charles, Bruce and Cyrus Hopkins and a sister-in-law, Bonnie Hopkins. Funeral services will be held at 11:00 a.m., Tuesday, January 31, 2017 at the Kimball Avenue United Methodist Church in Waterloo, Iowa with Reverend Karen Larson officiating and with Military rites provided by the Waterloo American Legion Post #138 and VFW Post #1623. Burial will follow at the Rowley Cemetery in Rowley, Iowa. Visitation will be held from 2:00 p.m.- 5:00 p.m. Sunday, January 29, 2017 at the Tharp Funeral Home in Albia, with Floyd’s family present throughout. A visitation will also be held on Tuesday, January 31, 2017 from 9:00 a.m. until the time of service at 11:00 a.m. at the Kimball Avenue United Methodist Church in Waterloo, Iowa. An open memorial has been established in Floyd’s name to be determined at a later date.

Floyd Eugene Hopkins, age 84, of Albia, passed away on Thursday, January 26, 2017, at the Monroe Care Center in Albia. Floyd was born in Independence, Iowa on February 20, 1932 to Beryl and Mildred (Albert) Hopkins, the oldest of 8 children.... View Obituary & Service Information

The family of Floyd Eugene Hopkins created this Life Tributes page to make it easy to share your memories.

Floyd Eugene Hopkins, age 84, of Albia, passed away on Thursday,...

Send flowers to the Hopkins family.