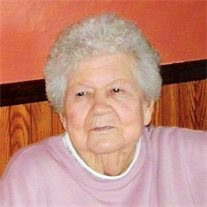 Fern Sarah Vance, age 93, of Bussey, Iowa died Sunday, April 22, 2007 at the Pella Regional Health Center in Pella, Iowa. She was born March 23, 1914 in Mahaska County, Iowa to James Garfield and Anna (Hughes) Smith. She married Frank Clair Vance on November 30, 1929 in Ottumwa, Iowa. He passed away in 1970. Fern was a homemaker and had also worked in the kitchen at the V. A. Hospital in Knoxville. She was a member of the Bussey United Methodist Church and the United Methodist Women's Group, the American Legion Auxiliary of Bussey and was active within the Senior Citizens Center in Bussey where she had helped served meals. Fern was an avid sports fan of the Iowa Hawkeyes. She is survived by three daughters, Betty Grace and husband Dale of Oskaloosa, Patty Barnhill of Bussey and Beverly Armstrong of Knoxville; one son-in-law, Frank Spaur of Bussey and one daughter-in-law Dottie Vance of Des Moines; 25 grandchildren, 52 great grandchildren and 13 great-great grandchildren. One sister, Pauline Wilson of Bussey also survives. Her parents, husband, one son, Charles Vance, three daughters, Louise Spaur and twins: Judy Sinclair and Janice Sinnott; three sisters and four brothers precede her in death. Funeral services will be held Wednesday, April 25, 2007 at 11:00 A.M. at the Bussey United Methodist Church in Bussey with Rev. Jill Leveck officiating. Burial will be in the Greenlawn Cemetery in Bussey. Visitation will open after 12 noon on Tuesday, April 24 at the Winfield Funeral Home with the family present from 6-8 P.M. Tuesday evening. Casket bearers will be Clay Grace, Dale Barnhill, Jim Vance, Mike Vance, Kevin Spaur, Rick Sinnott and Tim Sinclair. Memorials have been established to the Bussey United Methodist Church or to the Greenlawn Cemetery.

The family of Fern Sarah Vance created this Life Tributes page to make it easy to share your memories.

Send flowers to the Vance family.