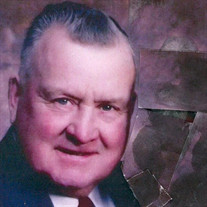 Eugene “Gene” Edward Claver, age 84, of Lovilia, passed away on Thursday, December 12, 2019, at the Monroe Care Center in Albia, surrounded by his loved ones. Gene was born on October 8, 1935, at home on the family farm in Monroe County, to Ralph Edward and Cleta Mae (Fraizer) Claver. He grew up and attended school in Lovilia. On March 18, 1955, he was united in marriage to Joyce Moyle at the United Brethren Church in Albia. To this union, three children were born, Dennis, Danny, and Carole. Gene worked at Maytag in Newton and left there to spend the rest of his life as a full time farmer. In his younger years, Gene enjoyed attending county fairs, looking at the livestock and exhibits and attending tractor pulls. Gene spent time at the Albia, Knoxville, Centerville, and Oskaloosa sale barns. He enjoyed driving around the farm looking at his land and checking his cows. Above all, Gene loved his wife very much and treasured time with his grandchildren and great grandchildren. He never knew a stranger and made many great friendships. He loved to be around people. Gene is survived by his wife of 64 years, Joyce Claver; 3 children, Dennis Claver, Danny Claver, and Carole (Dave) Chesnut; 5 grandchildren, Curtis (Sharis) Claver, Lisa (Jake) Keegel, Aaron (Jerusha) Claver, Christopher (Cierra) Bowersock, and Brittany (Dylan) Roberts; and 14 great grandchildren. Gene is also survived by many good friends. He was preceded in death by his parents, Ralph and Cleta; a great grandson, Lukas Beck; a sister, Marilyn (Martin) Tierney; and his parents-in-law, William and Grace Moyle. Visitation will be held from 2:00 p.m.-8:00 p.m. on Sunday, December 15, 2019, at the Tharp Funeral Home in Albia, with Gene's family present from 4:00-8:00 p.m. to greet family and friends. Funeral services will be held at 10:30 a.m., Monday, December 16, 2019, at the Trinity United Methodist Church in Albia, with Pastor Roger Henry officiating. Burial will follow services at Oak View Cemetery in Albia. An open memorial has been established to the family to be determined at a later date.

The family of Eugene Edward Claver created this Life Tributes page to make it easy to share your memories.

Send flowers to the Claver family.