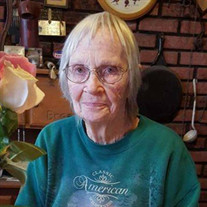 Esther Ruth Harrington, age 95, of Blakesburg, IA, went to join her beloved husband, Earl, on April 29, 2021, to go fishing yet again. Esther was born on March 3, 1926, to Clay and Cleva (Black) Foster east of Drakesville. The family later resided in Bloomfield where she was a 1943 graduate of Bloomfield High School. Esther married Earl F. Harrington on September 27, 1947, in Ottumwa. They lived in Ottumwa before settling east of Blakesburg in 1967. Esther was known to all as being a hard worker. She had various jobs after graduating high school until she finally retired at the age of 82. Earl and Esther were foster parents over many years and loved those kids as their own. Esther is survived by her four children, Marsha (Shawn Glenn) Hunter of Agency, Kenny (Debbie) Hartman of Whitehouse, TN, Doug Harrington of Blakesburg, and Alan (Kathleen) Harrington of Albia; 16 grandchildren; and 30 great grandchildren. She was preceded in death by her husband, Earl; her parents, Clay and Cleva Foster; her mother and father-in-law, Ora and Mark Harrington; 2 sisters, Mary Stockham and Martha Filler; and 2 brothers, Merle Foster and John Foster. A Celebration of Life will be held at a later date in May. In lieu of flowers, memorials may be made to the Harrington family and mailed to 7201 230th Ave., Blakesburg, IA 52536.

The family of Esther Ruth Harrington created this Life Tributes page to make it easy to share your memories.

Send flowers to the Harrington family.