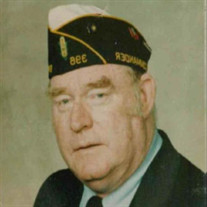 Ernest Patrick “Tennessee” Montgomery, age 90, passed away peacefully on Monday, February 20, 2017, at the VA Central Iowa Health Care in Des Moines, Iowa surrounded by his family. Pat was born on January 5, 1927, in Sewanee, Tennessee, the son of Fred and Sallie Montgomery. He received his education in public school graduating from Central High School in Winchester, Tennessee in 1944. He enlisted in the United States Navy on January 2, 1945. He was honorably discharged on October 4, 1949. Pat was united in marriage to Lucy Rae Wilson on January 26, 1948, in Albia. To this union they were blessed with five sons. Pat was a faithful member of Grace Episcopal Church, until its closure in 2016. Pat spent the majority of his career in Albia, having worked at Chamberlain Manufacturing and then running his own establishment, Tennessee’s Owl Tap, which he owned and operated for 22 years. Pat is survived by his sons, Frank (Ronda) Montgomery, Paul (Brenda) Montgomery, 4 grandchildren, Jolinda (Ben) Baker, Christian Montgomery, Emily Montgomery, Abigail Montgomery; 2 great-grandchildren, Luci Rae and Dylan Baker. Pat is also survived by many nieces, nephews, cousins and friends. He was preceded in death by his wife, Lucy; sons, John, Kenneth and Daniel; a grandson, Michael; his parents, sisters, Delphia, Sarah, Amy and Alice; brothers, James, Kenneth and Fred. Funeral services will be held at 11:00 a.m., Thursday, February 23, 2017, at St. Paul’s Lutheran Church in Albia, with Pastor Martha Kester officiating. Burial with military rites provided by the American Legion of Albia, Melrose and Lovilia will follow the service at the Oak View Cemetery in Albia. Visitation will be held from 3:00 p.m. - 8:00 p.m. Wednesday, February 22, 2017, at the Tharp Funeral Home in Albia, with Tennessee’s family present from 4-7 p.m. to greet family and friends. A memorial has been established to the American Legion Howard Cessna Post #136 or to the Welcome Home Soldier Memorial.

The family of Ernest Patrick "Tennessee" Montgomery created this Life Tributes page to make it easy to share your memories.

Send flowers to the Montgomery family.