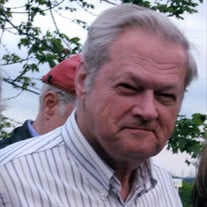 Elwood Ray Tharp, age 74, of Albia, IA, passed away on Friday, June 4, 2021, at MercyOne West Lakes in Des Moines, Iowa, surrounded by his 3 sons. Elwood was born on March 10, 1947, to Frank William and Fae Madeline (Graham) Tharp in Moline, IL. He grew up and attended Henrico High School in Richmond, Virginia. He served his country as a radio man in the United States Navy on the U.S.S. Epping Forest, U.S.S. Constant, and U.S.S. Warbler during Vietnam. After returning home from the service, he attended Indian Hills Community College in Ottumwa and received a degree in Air Frame & Power Plant. On January 16, 1971, he was united in marriage to Davida Brandon at the First Baptist Church in Albia and to this union, 3 sons were born, Frank, Tom, and Richard. Elwood and Davida later divorced. Elwood worked at Goode Feed & Seed before going to work for Paul Cabel as a tool and die maker where he helped perfect a process for making powdered metal bushings. He later went to work at Chicago Rivet in Albia before taking a job at 3M in Knoxville where he worked in maintenance from 1979 until his retirement in 2008. Over the years, Elwood enjoyed ham radios, going to sprint car races, and metal detecting. He loved to visit with others and never knew a stranger. He enjoyed going for rides, especially around the lake, and was always up for riding along with any of his sons or friends anywhere they may be going. He enjoyed attending auctions and was a John Deere tractor enthusiast. Above all else, Elwood’s family was everything to him. He loved traveling to see his family and cherished the time spent with his family, especially his grandchildren. Elwood is survived by his 3 sons, Frank (Annie) Tharp, Tom Tharp, and Richard (Monica) Tharp, all of Albia; 2 grandchildren, Brandon and Frankie Fae Tharp; and 3 siblings, Yvonne (Harry) Shertzer of Pfafftown, North Carolina, Richard (Cherry) Tharp of McGaheysville, Virginia, and Bill (Kelly) Tharp of Powhatan, Virginia. Elwood is also survived by a special friend, Ruth and many nieces, nephews, cousins, and good friends, all of whom he loved dearly. He was preceded in death by his parents, Frank and Fae Tharp; a sister, Mary in infancy; and a nephew, Graham Tharp. Visitation will be held from 2:00 p.m.-8:00 p.m. on Thursday, June 10, 2021, at the Tharp Funeral Home in Albia, with Elwood’s family present throughout the day and evening to greet family and friends. Funeral services will be held at 10:30 a.m., Friday, June 11, 2021, at the Tharp Funeral Home in Albia with Pastor Roger Henry and Pastor Richard Grimes co-officiating. Burial with military honors provided by the American Legion of Albia, Melrose, and Lovilia will follow services at Bethel Cemetery in Mahaska County. A memorial has been established to the Bethel Church.

The family of Elwood Ray Tharp created this Life Tributes page to make it easy to share your memories.

Send flowers to the Tharp family.