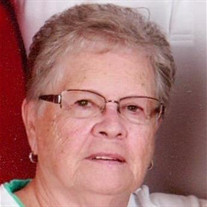 Eleanor “Claudine” Ross, age 83 of Lovilia, passed away peacefully surrounded by her family under the care of Pella Hospice on Wednesday, December 27, 2017, at her home in Lovilia. Claudine was born December 20, 1934, in Coalfield, Iowa to Claude and Pauline (Long) Gullion. She grew up and attended Lovilia High School graduating with the Class of 1953. On April 24, 1954 she was united in marriage to Gerald Ross in Knoxville, Iowa. To this union 5 children were born, Patti, Deb, Greg, Kenny and Brian. They shared 63 years of marriage together. Claudine was a homemaker her entire life while raising her children and was the caretaker of their son Brian. She also worked for the adoption center “Home Finding” before taking a job at the Clerk’s Office in Ottumwa. She also worked for the Chicago Rivet Factory for over 20 years until retiring. Claudine enjoyed doing crafts, cross stitching, sewing afghans, attending her children and grandchildren’s sporting events and watching the Chicago Bulls. She was an excellent cook who was known for her fried chicken and fish, meat loaf, pot salad and Pon Haus. Her real joy in life was spending time with her family and friends. Claudine is survived by her husband, Gerald Ross of Lovilia; her children, Patti (Bill) Maddy of Ankeny, Deb Clough of Lovilia, Greg (Lora) Ross of Georgetown, KY, Kenny (Anna) Ross of Albia, and Brian Ross of Oskaloosa; 9 grandchildren, Ross, Denise, Robert, Grace, Gunnar, Jenna, Breanna, Makenna and Peyton; 6 great grandchildren, Maddie, Kaydine, Beth, Will, Daisy and Brynlee; 4 sisters, Verona (Junior) Goemaat, Billie Reid, Kay (Marvin) Leach and Bonnie Purdy. She is also survived by many nieces, nephews, cousins and friends. She was preceded in death by her parents and 2 brothers, Clyde “Bo” and Jim Gullion. A private graveside service will be held at the Gullion Cemetery in Attica at a later date. Condolences may be left for the family at www.tharpfh.com.

Eleanor &#8220;Claudine&#8221; Ross, age 83 of Lovilia, passed away peacefully surrounded by her family under the care of Pella Hospice on Wednesday, December 27, 2017, at her home in Lovilia. Claudine was born December 20, 1934,... View Obituary & Service Information

The family of Eleanor "Claudine" Ross created this Life Tributes page to make it easy to share your memories.

Send flowers to the Ross family.