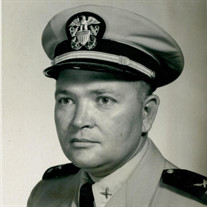 Edward Cecil Hannan, age 90, of Blakesburg, Iowa, passed away on April 15, 2022, at his home, surrounded by his family, under the care of EveryStep Hospice. Ed was born on May 12, 1931, at home in Console, in Monroe County, to Edward Cecil and Anna Berlie (Lewis) Hannan. He grew up attending school and graduated from the Albia High School with Class of 1949. Ed served in the United States Navy from 1948-1970, through peace time, Korea, and the Vietnam War. He retired in 1970 as Master Chief Petty Officer. Ed traveled the world, touching every continent except for Antarctica. On May 10, 1953, Ed married Florence Helen Boone in Blakesburg. To this union, 3 children were born, Sheila, Terri, and Dennis. Ed and Helen shared 68 years of marriage prior to his passing. After retiring from the Navy, Ed worked as a district accountant for Iowa Southern Utilities (ISU) in Ottumwa, retiring in 1988. Ed believed in hard work and was employed from the age of 17. He was a proud member of the NRA, the Fleet Reserve, American Legion Howard Cessna Post #136 in Albia, the Civil War Round Table in Ottumwa, the Blakesburg Public Library Board, and Friends of the Blakesburg Historical Preservation Society. He attended the Blakesburg Methodist Church. Ed was a very talented carpenter and loved to share his talent with others by donating his work for fundraisers as well as gifting pieces to family members. Ed made a variety of items from playsets to furniture pieces. Ed and Helen loved to square dance, which they did for approximately 40 years. Ed was also a square dance caller for 25 years and held various offices of the Central Iowa Caller’s Association and Southeastern Iowa Caller’s Association. Ed enjoyed visiting with others and never missed coffee with his buddies at the museum in Blakesburg. Ed loved to go to auctions and could never pass up a good deal. He enjoyed being outdoors and gardening, growing strawberries to be sold at the Farmer’s Market. He and Helen loved to camp and were active members of the Wapello Traveling Sam’s Camping Club. Ed enjoyed movies and was an avid reader and historian on the military, especially the Navy, and the Civil War. Ed was proud of having served his country and was blessed to be able to go on the Honor Flight with fellow veterans. Family was everything to Ed and he seldom missed a ball game or other activities in which his children, grandchildren, or great grandchildren were involved. Ed is survived by his wife, Helen; his children, Sheila (Dennis) Covert, Terri (John) Bride, and Dennis (Lisa) Hannan; 8 grandchildren, Missy (Ryan) Cloyd, Carmen (Steve) Glick, Jeremiah (Susanna) Covert, Josh (Mable) Bride, Monica (Tim) Steen, Bridget (Shane) Findley, Shaun Hannan, and Stormy (Chrystal) Hannan; 15 great grandchildren; 5 great-great grandchildren; a sister, Jaquelin Steele. Ed is also survived by several nieces, nephews, cousins, and good friends. He was preceded in death by his parents, Edward and Anna and 6 siblings, Dean, Richard, Allen, Kenney, Bonnie, and Carolyn. Visitation will be held from 2:00 p.m.-7:00 p.m. on Tuesday, April 19, 2022, at the Tharp Funeral Home in Albia, with Ed’s family present from 5:00 p.m.- 7:00 p.m. to greet family and friends. A memorial service will be held at 10:30 a.m. on Wednesday, April 20, 2022, at the Tharp Funeral Home in Albia, with Marty Williams and Pastor Jon Lund co-officiating. Burial will follow services at the Blakesburg Cemetery with military honors provided by the United States Navy and the American Legion of Albia, Melrose, and Lovilia. In lieu of flowers a memorial has been established to Friends of the Blakesburg Public Library or Friends of the Blakesburg Historical Preservation Society.

Edward Cecil Hannan, age 90, of Blakesburg, Iowa, passed away on April 15, 2022, at his home, surrounded by his family, under the care of EveryStep Hospice. Ed was born on May 12, 1931, at home in Console, in Monroe County, to Edward Cecil... View Obituary & Service Information

The family of Edward "Ed" Cecil Hannan created this Life Tributes page to make it easy to share your memories.

Send flowers to the Hannan family.