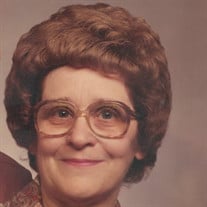 Edna P. Dicks, age 89, of Centerville and formerly of Albia, Iowa passed away Thursday August 3, 2017, at Golden Age Care Center in Centerville, Iowa. Edna was born July 25, 1928 to Milton and Bertha (Simmons) Stocker on the family farm in Moravia. She grew up and graduated from the Moravia High School with the Class of 1945. She was united in marriage to William Hershberger. To this union three children were born, Brenda, Dixie, and Terry. William later preceded her in death. She later married Howard Dicks. Howard passed away on November 5, 2007. Edna was a homemaker for most of her life. She also helped with babysitting and was employed with Monroe Plastics for 9 years. She was a member of the EUB Church and later a member of the Trinity United Methodist Church and in her younger years a member of the PTA. She enjoyed playing dominoes, jigsaw puzzles, canning fruits and vegetables from the garden, and traveling with her husband Howard to Colorado and California. Her real joy in life was spending time with her family and friends. She is survived by her children, Brenda (Andy) Kausalik of La Junta, Colorado and Terry (Sharon) Hershberger of Melrose; five grandchildren; 9 great grandchildren and 3 great-great grandchildren; three sisters, Bonne Clancy, Margie Coghlan and Betty Gruwell. She is also survived by many nieces, nephews, cousins and good friends. Edna is preceded in death by her husbands, William Hershberger and Howard Dicks; a daughter, Dixie Repp; her parents, Milton and Bertha; three brothers, Leo, Dwight and Verlin and four sisters, Margaret, Frieda, Carol and Mabel. There is no visitation planned. Funeral Service will be held at 1:30 p.m. on Monday, August 7, 2017 at Trinity United Methodist Church in Albia with Pastor Roger Henry officiating. Burial will follow service at Oak View Cemetery in Albia. A memorial has been established to Hospice of Central Iowa.

The family of Edna Pauline Dicks created this Life Tributes page to make it easy to share your memories.