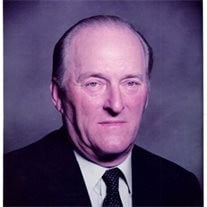 Earl Rowley, age 88, of Albia, Iowa died Monday, December 25, 2006 at the Monroe Care Center in Albia. He was born May 19, 1918 in Albia to Clarence and Margaret (Smith) Rowley, He married Blanche Rouse on May 17, 1941 in Willaimsburg, Iowa by Rev. Zerbe. Earl was a resident of Monroe County all his life, attending rural school and Albia High School. Earl operated a portable hammer mill before becoming engaged in dairy farming for most of his life, retiring from farming and moving to Albia in 1993. He was a farm Bureau member for many years and he and his wife were elected to the Ag Hall of Fame in 1996. Earl was a former Rotarian, and a former member and president of the Moravia Community School Board. Earl is a member of the Antiquity Lodge #252 in Moravia, and a member of the Kaaba Shrine of Davenport. Earl was also a member of the First Christian Church of Albia where he served as a deacon, elder, and committeeman. Earl is survived by his wife, Blanche Rowley of Albia; three sons, Jimmie Earl (Marilyn) Rowley of Hot Springs, South Dakota, Harold Ray (Teresa) Rowley of Albia, and Gary Lee Rowley of Waterloo; one daughter, Lou Ellen (Jim) Swinney of Del Rio, Texas; seven grandchildren; and several great grandchildren. Earl was preceded in death by his parents and a brother Glen who died in infancy. Funeral services will be held at 10:30 A.M. Thursday, December 28, 2006 at the Winfield Funeral Home in Albia with Rev. Lynda Carlson officiating. Burial will follow services at Oak View Cemetery in Albia. Visitation will begin after 4:00 P.M., Wednesday, December 27, 2006 at the Winfield Funeral Home in Albia. Earl's family will be present from 6 to 8:00 P.M., and a Masonic rite will be held at 7:00 P.M. Memorials may be given to The First Christian Church or to Hospice of Monroe County.

The family of Earl Rowley created this Life Tributes page to make it easy to share your memories.

Send flowers to the Rowley family.