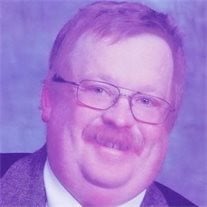 Dwaine Allen "Shorty" McFarland, age 56, of Albia, passed away Monday, March 28, 2016 at Mercy Medical center in Des Moines. Dwaine was born August 25, 1959 in Albia to Max D. and Nancy (Lancial) McFarland. He went to school in Albia and graduated from IHCC where he took Diesel mechanic. Dwaine worked for Bakers Feed and Grain, the Albia Community School District as a bus driver for many years. After retiring from the Albia School District, he worked for 10-15 Transit out of Ottumwa and worked as a personal transporter for PTI for the railroad. Dwaine also delivered the Albia Paper and volunteered his time at the Albia Museum. Dwaine was a 33 year member of the Fraternal Order of Eagles #3583 in Albia, and was a member of Fraternal order of Eagles #114 in Ottumwa, where Dwaine served as past president and held several positions on a local, district and state level. He was also a member of the Southern Iowa Tractor Club, Lad and Lassies square dancing club. Dwaine enjoyed bowling in a bowling league in Albia. He is survived by his mother, Nancy McFarland; a sister, Karen (Rick) Little; 4 nephews, Ryan May, Cory (JoAnna) May, Michael May, and Tyler Little; 1 great nephew, Ryker Little and 2 aunts and several cousins. He was preceded in death by his father, Max McFarland and many aunts, uncles, and a cousin, Jeanie. Funeral service will be held at 10:00 a.m., Saturday, April 2, 2016, at Tharp Funeral home in Albia. Burial will follow services at the Hiteman Cemetery in Hiteman. Visitation will be held from 1:00-8:00 p.m. Friday, April 1, 2016, at the Tharp Funeral Home in Albia, with Dwaine's family present throughout the day and evening. In Lieu of flowers a memorial has been established to the family. Condolences may be left for the family at www.tharpfh.com.

The family of Dwaine "Shorty" Allen McFarland created this Life Tributes page to make it easy to share your memories.