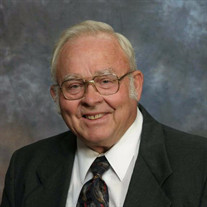 Dr. Everett Dean Stocker, age, 87 of Albia, passed away Thursday, August 10, 2017, at his home in Albia. Dean was born March 9, 1930, to Clarence Moses and Mildred (Grooms) Stocker on the family farm southeast of Albia. He grew up and attended K-8 in a one room school house in Selection. He graduated from Albia High School in 1947 and Graduated from Iowa State University with a Degree in Veterinary Medicine in 1960. In 1952 he was drafted into the United States Army and served his country in the 45th Infantry Division during the Korean War and was awarded the Bronze Star. Dean married Mary Jean Wiley on September 4, 1955 at the Methodist Church in Leon, Iowa. To this union six children were born, Diane, Carol, David, Nancy, Dan and Norman. As a young man, Dean was active in 4-H and FFA helping out various individuals with their cattle herds. In 1960 Dean began working as a veterinarian in Monroe County for the next 33 years before retiring in 1993. Since retiring, he has spent his time volunteering his time assisting with countless projects at the Monroe County Historical Society, gardening, helping with church services and traveling with Mary. Dean was a member of the First Christian Church and later the Trinity United Methodist Church and taught Sunday school for over 45 years. He was the past president of the Chamber of Commerce, a 52 year member of the Rotary Club in Albia, a 60 year member of the American Legion and a 50 year member of the American Veterinarian Association. He served on the Albia Community School Board, was inducted into the Albia Hall of Fame in 1992, was a lifetime member of the IVMA and received the IVMA Presidents award in 2000. Dean was inducted into the Albia High School Wall of Fame in 2003, he received the Agribusiness Farm Bureau Award in 2005 and was a recipient of many more recognitions and awards. Dean is survived by his wife of 61 years Mary Stocker of Albia; five children, Diane (Jerry) Meyer and their children, Matthew and Nathan Meyer; Carol Stocker, Nancy (Mike) Langstraat and their children, Kyle and Kayla; Dan (Julie) Stocker and their children, Cameron and Carson; Norman (Shantel) Stocker and their children, Michael and Mitchell and many nieces, nephews, cousins and good friends. Dean was preceded in death by a son in infancy, David; his parents, Clarence and Mildred; a sister Marjorie Spain; and four brothers, Paul, C.J., Floyd, and Darrell Stocker. Funeral services will be 10:30 a.m., Monday, August 14, 2017, at Trinity United Methodist Church in Albia, with Pastor Lynda Carlson officiating. Burial with military rites provided by the American Legion of Albia, Melrose and Lovilia will follow the service at Oak View Cemetery in Albia. Visitation will begin at 1:00 p.m. until 8:00 p.m., Sunday, August 13, 2017, at Tharp Funeral Home in Albia, with Dean’s family present from 5:00 p.m. until 8:00 p.m. Sunday evening to greet family and friends. A memorial has been established to the Heifer International or Welcome Home Soldier Monument. Heifer International is a charity organization working to end hunger and poverty around the world by providing livestock and training to struggling communities. The core model is Passing on the Gift, which means families share the training and pass on the first female offspring of their livestock to another family. This extends the impact of the original gift, allowing the once impoverished family to become donors and full participants in improving their communities. For additional ways you can help visit www.heifer.org Welcome Home Soldier Monument is a public monument of national magnitude to honor all United States Veterans, living or deceased, and is located in the nation's heartland of Albia Iowa. It memorializes the active duty peacetime and wartime honorably discharged veterans in the past, present, and those in the future. For additional ways to share your time or skills, visit https://www.welcomehomesoldiermonument.com

Dr. Everett Dean Stocker, age, 87 of Albia, passed away Thursday, August 10, 2017, at his home in Albia. Dean was born March 9, 1930, to Clarence Moses and Mildred (Grooms) Stocker on the family farm southeast of Albia. He grew up and attended... View Obituary & Service Information

The family of Dr. Everett Dean Stocker created this Life Tributes page to make it easy to share your memories.

Send flowers to the Stocker family.