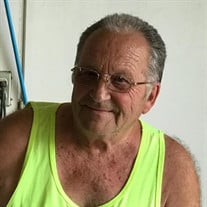 Douglas “Doug” Arthur Bacon, age 78, of Albia, passed away on Thursday, September 17, 2020, at the University of Iowa Hospitals and Clinics in Iowa City, IA. Doug was born on September 2, 1942, in Knoxville, Iowa to Herman and Cloy (Tickle) Bacon. Doug was united in marriage to Gwendolyn Gwinn and to this union, 2 children were born, Doug Jr. and Hiedi. Doug and Gwendolyn later divorced. On December 14, 1990, Doug married Kim Cooper. Doug and Kim shared 29 years of marriage prior to his passing. Doug went to work at the VA Hospital in Knoxville where he worked for 37 years in various roles including being a Nursing Assistant and assisting with fire control. While working at the VA Hospital, Doug also painted houses in his spare time. Doug was also a truck driver for a period of time. Doug loved nature and enjoyed being outdoors, fishing and deer hunting. He was a very talented woodworker who especially enjoyed making ducks. Doug loved flower gardening and always gave his roses to many people. He was very generous and never knew a stranger. He cherished spending time with his family, friends, and his 3 dogs, Sam, Annabelle, and Peanut. Doug is survived by his wife, Kim Bacon; a son, Doug Jr. (Karen) Bacon; a daughter, Hiedi (Ed) Touney; 10 grandchildren; 2 great grandchildren; and 2 sisters, Pat (Ron) Neer and Rose (Jim) King. Doug is also survived by many nieces, nephews, cousins, and good friends. He is preceded in death by his parents, Herman and Cloy; a grandson, Duane Touney; and 2 brothers, Dale and Danny Bacon. Per Doug’s wishes, his body has been cremated and a private family burial will be held at a later date. An open memorial has been established to the family.

The family of Douglas "Doug" Arthur Bacon created this Life Tributes page to make it easy to share your memories.

Send flowers to the Bacon family.