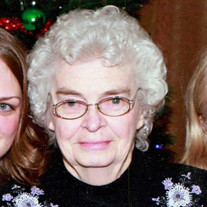 Dortha Jane (Kenton) Chelar, age 93 of Albia, passed away Friday, September 1, 2017, at the Golden Age Care in Centerville, Iowa. Dortha was born on October 3, 1923, to John and Ina (Seiber) Kenton, on the family farm in rural Lucas County, Iowa. When she was 12, the family moved to a farm near Moravia. She graduated from Moravia High School in 1941. Her parents both passed away by the time she was 20, and with her brothers, Roy and John, both away in the Navy, Dortha and her sister, Ruth, took over the operation of their farm. It was said the girls could harness a team and work the fields as good as the men. Dortha learned to be a strong, independent woman at a young age. Dortha met and married Frank Chelar on January 14, 1951. They had 3 children, Elaine, Doris and Gale. The family lived on the dairy farm north of Hiteman the rest of her life. Dortha was an active life-long member of Trinity Methodist Church where she participated in the bell choir, Country Gospel, was a Sunday school teacher, and served on the funeral dinner committee. She was past President of the Monroe County Hospital Auxiliary. She and Frank were inducted into the Farm Bureau Hall of Fame, and their farm was named both a Century Farm and Heritage Farm at the Iowa State Fair by the Iowa Secretary of Agriculture. Dortha is survived by her daughter, Doris Little of Albia; her son, Gale (Ursula) Chelar of Columbus, GA; 3 grandchildren, Jeremy (Kathy) Little of Edgerton, KS, Dan (Jenny) Little and Jennifer Little of Albia; and 3 great-grandchildren, Aidan, Lenora, and Austin. She is also survived by several nieces and nephews. She is preceded in death by her parents, John and Ina; her husband, Frank; a daughter, Elaine; brothers, Roy and John; and a sister, Ruth. Funeral services will be held at 10:30 a.m., Wednesday, September 6, 2017, at Trinity United Methodist Church in Albia, with Pastor Richard Grimes officiating. Burial will follow the service at Union Chapel Cemetery in rural Monroe County. Visitation will begin at 4:00 p.m. until 8:00 p.m., Tuesday, September 5, 2017, at the Tharp Funeral Home in Albia, with Dortha’s family present throughout to greet family and friends. A memorial has been established to Union Chapel Cemetery.

The family of Dortha Jean Chelar created this Life Tributes page to make it easy to share your memories.

Send flowers to the Chelar family.