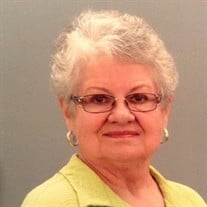 Dorothy Marie Walker, age 74, of Blakesburg, passed away peacefully on Thursday, July 12, 2018, at the Vista Woods Care Center in Ottumwa, Iowa. She was born on November 30, 1943, to Nikita and Fedora (Maslinova) Usovsky in Munich, Germany. She grew up and attended the Marion High School. On March 26, 1962, she was united in marriage to Bobbie “Bob” Walker. To this union 5 children were born, Bill, Deb, Mike, Jeff and Dori. They shared 46 years of marriage together until Bob’s passing in 2008. Dorothy was a homemaker and a longtime seamstress, working for Delong in Albia for 20 years and then at Trophy Glove for 3 years until the plant closed. She was a member of St. John the Baptist Orthodox Church in Cedar Rapids. Dorothy was involved in the Loving Shepherd Food Pantry and Small Town Christmas. She enjoyed sewing, tending to her vegetable and flower gardens, cooking, dancing and was crazy about Elvis. Above all, she enjoyed spending time with her family and friends. Dorothy is survived by her children, Bill Walker of Ottumwa, Deb (Jeff) Clark of Evansdale, Mike (Heather) Walker of Albia, Jeff (Treena) Walker of Blakesburg and Dori (Brandon) Otey of Oskaloosa; 11 grandchildren; 9 great grandchildren; two sisters, Olga (Tom) Flaming and Anna (Paul) Straub both of Marion; a sister-in-law, Rae Usovsky of Cedar Rapids and brothers-in-law, Dave (Gwen) Fisher of Blakesburg, Don Fisher of Ottumwa and Paul Post of Blakesburg. She is preceded in death by her parents, Nikita and Fedora; her husband, Bob and her brothers, Jack, Gregory, Victor and Wassily Usovsky. Visitation will be held from 2:00 p.m. to 8:00 p.m. Monday, July 16, 2018, at Blakesburg United Methodist Church in Blakesburg, with Dorothy’s family present from 5:00 to 8:00 p.m., to greet family and friends. Funeral services will be held at 11:00 a.m., Tuesday, July 17, 2018, at the Blakesburg United Methodist Church in Blakesburg with Pastor Jim Ellis officiating. Burial will be at the Blakesburg Cemetery in Blakesburg. Memorials have been established to the family to be determined at a later date.

Dorothy Marie Walker, age 74, of Blakesburg, passed away peacefully on Thursday, July 12, 2018, at the Vista Woods Care Center in Ottumwa, Iowa. She was born on November 30, 1943, to Nikita and Fedora (Maslinova) Usovsky in Munich,... View Obituary & Service Information

The family of Dorothy Marie Walker created this Life Tributes page to make it easy to share your memories.

Send flowers to the Walker family.