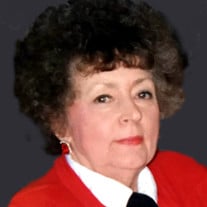 Dorothy Ruth (Dies) Ferguson, age 89, of Norwalk, formerly of Albia, passed away on Wednesday, April 17, 2019, at the Taylor House in Des Moines, Iowa. Dorothy was born in Hiteman, Iowa, on January 28, 1930, to Sidney and Elsie (Kent) Dies. On November 11, 1950, she married Bill Ferguson at the Methodist Church in Albia. To this union, 4 children were born, Wayne Robert, Bill, Kevin, and Kendra. Dorothy and Bill shared 59 years of marriage prior to his passing in 2010. She grew up during the depression in Hiteman, Iowa, was graduated from Albia High School, Class of 1948. A member of the National Honor Society. After high school she worked at the People’s National Bank in Albia for J.E. King. She started dating Bill after he returned from WWII. She was impressed by his car and often told stories of how he got her out of Hiteman. She left the bank when she became a housewife and mother. She and Bill made their home in Albia, building two homes because Bill could not stand to pay rent. They built a house on Benton Ave East and then while Dorothy was in the hospital after giving birth to Kendra, Bill surprised her and bought the land on Highway 5 which became Dorothy’s dream home. She was the ultimate housewife and mother and she decorated and kept her home immaculate. She and Bill had many years of fun dinners and dancing, including Saturday night trips with friends to Shorty’s Steak house in Pleasantville. After Bill’s retirement they travelled in a motor home to Alaska and Arizona with friends, eventually becoming snow birds in Apache Junction, AZ. They stayed in their Albia home until Bill’s memory loss moved them to Indianola to an assisted living facility. When Bill’s health declined, her favorite son-in-law Rick built her a mother-in-law cottage in Norwalk, IA on Rick and Kendra’s property. She had lived there on her own for almost 11 years. She was an excellent seamstress and she painted in ceramics and made lots of beautiful pieces including an entire Nativity set. She was an amazing self-taught cook and the family remembers her home-made spaghetti sauce, and Sunday dinners. She continued to cook in her cottage with Peanut Butter fudge and lemon cakes being some of her grandson’s favorites. She was a beautiful, classy lady with a lot of pride. She loved to get her hair done weekly, and painted her fingernails daily while in Norwalk. Dorothy is well known for being dressed to the hilt. She loved shopping. She could be found at Younker’s buying red clothing, sparkly jewelry and Estee Lauder make-up and cologne. The ladies at the make-up counter would always comment about her young looking skin and no wrinkles. She had multiple comments of resembling Elizabeth Taylor. She loved glass-ware and collected dishes and had a doll collection that filled an entire bedroom. She loved to share stories about Hiteman and the old days, and she shared them with all who visited. She loved history, kept a dictionary and a globe nearby and did the Jumble puzzle daily as she said to keep her mind sharp. She loved Jeopardy, the Antique Road Show and attending events at the Civic Center after moving to Norwalk. Nights on the town always including dinner out with a drink or two. She will be missed by all very much, but was tired and let us know she was prepared and ready to go. Dorothy is survived by her children, Bill (Jovilisi) Ferguson of San Francisco, CA and Kendra (Rick) Crall of Norwalk, IA; 4 grandsons, Austin Ferguson of San Francisco, CA, Gabe (Abby) Crall of Norwalk, IA, Garrett Crall of Omaha, NE and Kason Crall of Iowa City, IA; step great grandchildren, Levi and Tessa; and multiple nieces and nephews. She is preceded in death by her husband, Bill in 2010; 2 sons, Wayne Robert in infancy and Kevin Lee; her parents, Sidney and Elsie Dies; 3 brothers, Harold Dies, LeRoy Dies, and Sidney Jr. Dies; and 2 sisters, Alice Skomorowski and Elsie Grace Judge. Visitation will be held from 9:00 a.m.-11:00 a.m. on Monday, April 22, 2019, at the Tharp Funeral Home in Albia with Dorothy’s family present to greet family and friends. Funeral services will be held at 11:00 a.m. on Monday, April 22, 2019, at the Tharp Funeral Home in Albia with Pastor Richard Grimes officiating. Burial will follow services at Oak View Cemetery in Albia. A memorial has been established to the Welcome Home Soldier Monument.

Dorothy Ruth (Dies) Ferguson, age 89, of Norwalk, formerly of Albia, passed away on Wednesday, April 17, 2019, at the Taylor House in Des Moines, Iowa. Dorothy was born in Hiteman, Iowa, on January 28, 1930, to Sidney and Elsie (Kent)... View Obituary & Service Information

The family of Dorothy Ruth Ferguson created this Life Tributes page to make it easy to share your memories.

Send flowers to the Ferguson family.