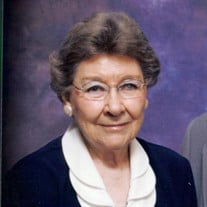 Doris Sophy Patton, age 96, of Albia, passed away on Tuesday, November 10, 2020, at Homestead in Albia, Iowa. The youngest child of Dutch immigrants John and Johanna (Bongers) Vlaswinkel, she was born on October 16, 1924, near Eddyville, IA. Before her marriage to Donald Patton on June 4, 1948, Doris taught country school. She had a special love for each child. She also taught Sunday School and Bible School for many years. Doris and Donald were blessed with 3 children, Stephen, Debra, and Brad. Doris is survived by 2 children, Stephen Patton of Apache Junction, AZ and Debra (Tom) Reynolds of Albia; a daughter-in-law, Denise Patton of Albia; 7 grandchildren, Tonya Patton of Ottumwa, Jeremy (Carrie) Patton of Indianola, Andy (Angela) Illingworth of Indianola, Adam Illingworth of Des Moines, Nickolas (Bailey) Illingworth of Des Moines, Travis (Emily) Patton of Albia, and Tyson (Jaimie) Patton of Albia; and 9 great grandchildren. She was preceded in death by her husband of 69 years on June 30, 2017, Donald Patton; a son, Brad Patton; her parents, John and Johanna Vlaswinkel; 3 sisters, Wilma Knoot, Anna Smith, and Charlotte in infancy; a brother, John Vlaswinkel; and a daughter-in-law, Connie Patton. Visitation will be held from 2:00 p.m-8:00 p.m., on Sunday, November 15, 2020, at the Tharp Funeral Home in Albia, with Doris’s family present from 5:00-8:00 p.m. to greet family and friends. Due to the most recent proclamation and enhanced public health measures for the state of Iowa, masks will be mandatory for all those in attendance over the age of 2. Graveside services will be held at 10:30 a.m., Monday, November 16, 2020, at Oak View Cemetery in Albia, with Pastor Roger Henry officiating. Memorials have been established to the Monroe County Ministerial Association and Monroe County Little League.

Doris Sophy Patton, age 96, of Albia, passed away on Tuesday, November 10, 2020, at Homestead in Albia, Iowa. The youngest child of Dutch immigrants John and Johanna (Bongers) Vlaswinkel, she was born on October 16, 1924, near Eddyville,... View Obituary & Service Information

The family of Doris Sophy Patton created this Life Tributes page to make it easy to share your memories.

Doris Sophy Patton, age 96, of Albia, passed away on Tuesday,...