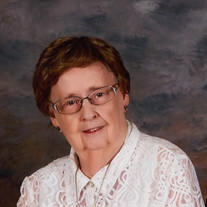 Doris Geraldine O’Brien, age 81, of Albia, passed away on Monday, October 15, 2018, at the Monroe County Hospital in Albia, under the care of EveryStep Hospice. Doris was born on December 11, 1936, in Colorado to Walter “Casey” and Alma (Kimes) Garrett. She graduated high school from Ottumwa Heights in 1955. She then attended college at Ottumwa Heights, graduating in 1957 as Salutatorian of her class and received the Citizenship Award. She was united in marriage to James O’Brien on July 6, 1957, at St. Mary’s Catholic Church in Ottumwa, Iowa. To this union, a son Michael was born. Doris and James shared 61 years of marriage prior to her passing. Doris worked at Ragtime in Albia from 1973-2007. She was a substitute teacher for many years in the Albia Public and St. Mary’s Schools. She was very generous with her time. She taught missionary in Mississippi in 1955-1956. She was on the Board of Directors and was President of the Albia Community Theatre. Doris was also President of the Albia/Monroe County Museum from 1995-2017. She was a talented musician, playing the organ, harp, violin, and cello. Doris started playing the organ at church in Ottumwa at the age of 10 and continued to do this through her college years. She was an organ player for St. Mary’s Church in Albia for over 40 years. She was a musician on the Southeast Iowa Symphony and the Ottumwa Symphony and was a rehearsal musician with the Albia Players. She played for Simon Estes at the Ottumwa College and Centerville Theatre. Doris was previously Woman of the Year in Albia. Doris had many achievements in her lifetime but deemed her greatest achievement as “picking her in-laws.” Doris is survived by her husband, James O’Brien of Albia; a son, Michael O’Brien of Ottumwa; a sister-in-law, Mary (Gary) Mitterer of Fremont; and a brother-in-law, John O’Brien of Albion. She is also survived by many nieces, nephews, and great nieces and nephews. She is preceded in death by her parents, Walter “Casey” and Alma Garrett; a sister, Betty Dodds; 2 brothers-in-law, Lester Dodds and John Richard Lenger; 2 sisters-in-law, Virgene Lenger and Agnes Conley O’Brien; 3 aunts, Margaret Blubaugh, Elizabeth Kearney, and Veronica Gildersleeve; and 3 nephews, Gary, John Walter, and Paul Lenger. Visitation will be held from 1:00 p.m. until 8:00 p.m. on Thursday, October 18, 2018, at the Tharp Funeral Home in Albia with Doris’s family present to greet family and friends from 4:00-8:00 p.m. A rosary will be held at 5:00 p.m. led by St. Mary’s Altar and Rosary Society and a Christian Wake Service will be held at 6:00 p.m. A Mass of Christian Burial will be held at 10:30 a.m. on Friday, October 19, 2018, at St. Mary’s Catholic Church in Albia, with Father Michael E. Volkmer C.PP.S. officiating. Burial will follow services at St. Mary’s Cemetery in Albia. A memorial has been established to the Albia Performing Arts Theatre.

The family of Doris Geraldine O'Brien created this Life Tributes page to make it easy to share your memories.

Doris Geraldine O’Brien, age 81, of Albia, passed away on Monday,...

Send flowers to the O'Brien family.