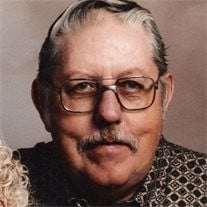 Donald Eugene Moore, age 69, of Melrose, Iowa died Saturday, July 21, 2007 at the Knoxville Hospital, under Hospice Care. He was born January 19, 1938 in rural Appanoose County, Iowa to William Randall and Edna Bell (Hammond) Moore. He married Julia Moore May 26, 1962 at the St. Patrick's Catholic Church in Melrose. Donald grew up in rural Appanoose and Lucas County. He farmed with his father during this time. Donald joined the Army National Guard in 1956 and was enlisted until 1964. He then worked for Johnson Machine Works in Chariton for sixteen years. In 1972 he started working for John Deere in Ottumwa, and retired in 1998. After retirement he continued to farm. He was a volunteer on the Melrose fire department for many years, and was also a member of UAW Local #74 of Ottumwa. He enjoyed hunting, fishing, woodworking, welding, watching deer and turkey on his farm, and especially spending time with his grandchildren. He is survived by his wife, Julia of Melrose; daughter, Rita Johnson of Watson, MO.; son John (Robin) Moore of Knoxville; five grandchildren, Christopher and Michaela Johnson, and Daniel R. Cody W. and Cassidy R. Moore. Two brothers, Charles (Deloris) Moore of Chariton, Truman (Donna) Moore of Udell; and one sister, Grace (Richard McDonald of Russell also survive Donald. His parents; son, Richard E. Moore; three brothers, Paul, Bernard, and James, and two sisters, Doris Bell, and Evelyn Cronin, precede him in death. Graveside Services will be held at 11:00 A.M. Tuesday, July 24, 2007 at Mt. Calvary Cemetery in Melrose with Rev. Tim Guthridge officiating. Visitation will open after 12:00 P.M. on Monday, July 23, 2007 at the Winfield Funeral Home in Albia with the family present from 6-8 P.M. on Monday evening. There will be a Rosary Service at 4:00 P.M. and also at 7:00 P.M. Monday evening. Casketbearers will be Dave Wolman, Jim Cronin, Jim Moore, Willy Sears, Tim Moore, and Cory Frank. Honorary Casketbearers will be Donald's Grandchildren. Memorials may go to the Moravia First Responders, Melrose Fire Department or to Hospice of Central Iowa.

The family of Donald Eugene Moore created this Life Tributes page to make it easy to share your memories.

Send flowers to the Moore family.