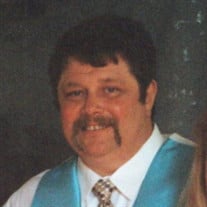 Donald “Mark” Major, age 60, of Lovilia, passed away on Thursday, March 25, 2021, at the Monroe County Hospital in Albia, IA. Mark was born on December 15, 1960, to Donald Eugene and Martella Ann (Holcomb) Major at the Monroe County Hospital in Albia. He grew up and attended school in Albia before enlisting and serving his country in the United States Army stationed in Germany. Upon returning from the armed services, Mark worked for various farmers in the area prior to going into manufacturing jobs, most recently working at L & S Tools in Albia. He was an avid outdoorsman who loved to camp, fish, and hunt, as well as spend time at his lake house at Leisure Lake in Missouri. He was very proud of his military service and volunteered his time helping the Honor Guard with parades and other events. He was a die-hard Ford guy and liked to takes ride around Lovilia. His true passion in life was spending time with his family and friends, especially his grandchildren and attending their events. Mark is survived by 3 daughters, Kassie Williams of Sigourney, IA, Crystal (Jerry) Humphrey of Lisbon, IA, and Katie (Tony) Cook of Albia, IA; his mother, Marty Major of Lovilia, IA; 4 siblings, Donna (Mike) Flattery of Knoxville, Jeannie (Lonnie) McCombs of Knoxville, Mick (Vicki) Major of Georgia, and Norm (Sandy) Major of Albia; and 10 grandchildren, Darian, DeVon, Ryleigh, Anthony, Conner, Brooklyne, Chad, Alex, Adrian, and Kirra. Mark is also survived by several nieces, nephews, cousins, and good friends. He was preceded in death by his father, Donald Major; a son, Corey Short; and his grandparents, Milo and Icle Major and Eugene and Estella Holcomb. Visitation will be held from 4:00 p.m.- 8:00 p.m. on Sunday, March 28, 2021, at the Tharp Funeral Home in Albia with Mark’s family present from 6:00 p.m. – 8:00 p.m. to greet family and friends. A memorial service will be held at 10:30 a.m. on Monday, March 29, 2021, at the Tharp Funeral Home in Albia with Pastor Brad Gray and Kirby Selby co-officiating. Burial with military honors provided by the American Legion of Albia, Melrose, and Lovilia will follow services at Oak View Cemetery in Albia. A memorial has been established to the Welcome Home Soldier Monument in Albia.

The family of Donald "Mark" Major created this Life Tributes page to make it easy to share your memories.