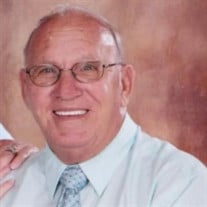 Donald “Don” Berl Eilander, age 84, of Albia, IA, passed away on January 14, 2022, at the Mahaska Health Hospital in Oskaloosa, surrounded by his family. Don was born on September 21, 1937, at home to Burl and Marie (Reynolds) Eilander. He attended Newton Schools. He served his country in the United States Army from 1960 - 1966 as a sniper in Germany. Don worked for his uncle, Garret Eilander, at Merchant Storage and Transfer in Newton, Iowa. On September 20, 1963, he was united in marriage to Joyce McCammant in Newton. In 1976, Don and Joyce moved to Albia, Iowa and started attending the Albia Baptist Temple, where they have attended for 46 years. They owned the Albia Dairy Bar from 1976 -1980 and Smitty's Sandwich Shop from 1979 - 1999. They also owned DJ’s Corner from 1990 - 1995 in Moravia. Don enjoyed fishing, hunting, going to the lake, and boating. He spent his mornings with his friends at Hardees and loved spending time with his grandchildren and family. Don is survived by his wife of 58 years, Joyce McCammant Eilander; his children, Donnie Eilander of Georgetown, Delaware, Kelley (Terry) Yenger of Newton, Iowa, Kim (Mike) Beaty of Moravia, Iowa, and Brian Eilander of Los Angeles, California; his grandchildren; Jeremy (Reanna) Yenger of Newton, Iowa, Tara (Josh) Whitson of Newton, Iowa, Brenden (Alaina) Eilander of Des Moines, Iowa, Shaun Eilander of Des Moines, Iowa, Donavan (Nicole) Beaty of Centerville and Brianna Beaty of Moravia; his great grandchildren, Izabella, Gabriel, Brklyn, and Hunter Whitson and Ainsley, Benson, and Cabot Yenger of Newton, Iowa; and his sister, Sherry Wharff of Newton, Iowa. Don is also survived by many nieces, nephews, and friends. He was preceded in death by his parents, Burl and Marie Eilander; his son, Brent Eilander of Ottumwa; his siblings, Betty (Gene) McDonald, Lloyd (Lois) Eilander, Sylvester (Janet) Eilander, Barb (Chris) Smith and Gene Wharff of Newton, and Cinda Shaver of Kellogg, Iowa; and his twin sister, Donna Marie Eilander in infancy. Visitation will be held from 1:00 p.m.-7:00 p.m. on Friday, January 21, 2022, at the Albia Baptist Temple in Albia, with Don's family present throughout to greet family and friends. Funeral Services will be held at 11:00 a.m., Saturday, January 22, 2022, at the Albia Baptist Temple in Albia, with Pastor Chris Harris officiating and military honors provided by the American Legion of Albia, Lovilia, and Melrose. A luncheon will be held at the Albia Baptist Temple following the service. Following the luncheon, burial will be at Newton Union Cemetery in Newton, IA.

The family of Donald "Don" Berl Eilander created this Life Tributes page to make it easy to share your memories.

Send flowers to the Eilander family.