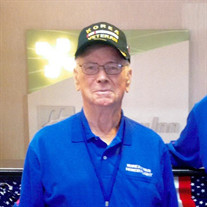 Donald Edwin Billings, age 88, of Knoxville formerly of Albia, passed away on Wednesday, January 9, 2019, at West Ridge Specialty Care in Knoxville, Iowa. Donald was born on October 30, 1930, to Harrison and Hattie (Cook) Billings in Albia. He grew up and graduated from the Albia High School with the Class of 1949. Donald served his country in the United States Army with the military police during the Korean War. On August 17, 1951, he was united in marriage to Lois “Jeane” Yenger at the Nazarene Church in Albia. To this union, 4 children were born, Diana, Mark, Paul, and Julie. Donald and Jeane shared 30 years of marriage prior to her passing on April 21, 1981. Donald went to work for Morrell’s in 1952, moved with the company to Souix Falls when they relocated in 1973, and retired from there in 1985 at the age of 55. He was a member of the American Legion and enjoyed being outdoors where he and his wife hobby farmed. Donald had an interest in aviation and worked toward obtaining his private pilot’s license. Donald’s true joy in life was spending time with his family and friends. Donald is survived by his 4 children, Diana (Jim) Ryan, Mark (Lois) Billings, Paul (Judy) Billings, and Julie Gardner; 6 grandchildren, Matthew, Stephanie, Amanda, Amber, Adam, and Luke; 12 great-grandchildren; a brother, Ronald (Betty Jean) Billings; a foreign exchange student, Katie Weber; and 3 lifelong best friends, Charlie Burk, James “Pinky” O’Brien, and Clarence “Rocky” Rockwell. He is also survived by several nieces, nephews, and cousins. He is preceded in death by his wife, Jeane; his parents, Harrison and Hattie; a great-granddaughter, Brenna Ryan; a brother, Gerald Billings; and 3 sisters, Evelyn Matney, Katherine Nichols, and Beulah Lepley. Visitation will be held from 4:00 p.m. to 8:00 p.m. on Friday, January 11, 2019, at the Church of the Nazarene in Moravia, with Donald’s family present throughout to greet family and friends. Funeral services will be held at 2:00 p.m., Saturday, January 12, 2019, at the Church of the Nazarene in Moravia with Pastor Terry Chapman officiating. Burial with military honors provided by the American Legion of Albia, Lovilia and Melrose will follow services at Oak View Cemetery in Albia. A memorial has been established to the Wounded Warrior Project.

The family of Donald Edwin Billings created this Life Tributes page to make it easy to share your memories.

Send flowers to the Billings family.