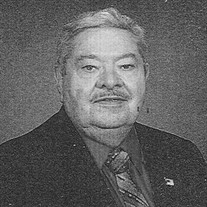 Don L. Huston, 92, of Albia died on Saturday, Jan. 11, 2020 at the Monroe County Hospice Room. He was born on May 12, 1927 to Louis and Nina Blake Huston in St. Louis, Mo. Following his high school graduation he enlisted in the U.S. Army Air Corps and served from July 27, 1944 to Dec. 24, 1946 with the U.S. occupation forces in Germany. Upon his discharge he enrolled in the University of Missouri School of Journalism, graduating in June of 1951. He married Carol Johnson on Sept. 16, 1950. They were married 66 years before her death on Dec. 18, 2016. Don started his newspaper career in Sikeston, Mo. then moved his young family to Audubon, Iowa where he served as editor of the newspaper. In August of 1955 he became editor of the Waverly Independent and Bremer County Democrat, serving in that position 39 years until his retirement in 1993. He was known as a tough-minded and fair newspaper professional, devoted to his community. He was an active member of Waverly Jaycees, served for years on the Waverly Heritage Days Committee, served on the Waverly Human Relations Committee in the 1960s and was an active member of Trinity United Methodist Church in Waverly. When he and his wife, Carol, moved to Albia in 2014 to be closer to their daughter and her family, he became active in Trinity UMC in Albia, attending the Trinity Builders Sunday School Class. He also joined the Albia Newspaper staff as a volunteer, writing the “Looking Back Column.” He continued to write, completing a book of personal memories for his children and grandchildren. In his younger years he enjoyed following his seven children in their sports, music, drama and debate activities in high school and college. Later, he enjoyed traveling with his wife throughout the U.S. to visit children and grandchildren scattered from Washington, D.C. to San Francisco. He was also an avid fisherman and reader of history. He is survived by six children, Pat (Susan Jacques) Meyer, Iowa City; David (Judy) Huston, Dallas, Texas; Janis (David) Paxton, Albia; Donald Huston, Boise, Ida.; Denis (Cathy) Huston, Orinda, Calif.; and Devon Huston, Phoenix, Ariz.; 12 grandchildren; seven great-grandchildren; several step grandchildren and great-grandchildren; brothers Douglas of New York and Denis of Missouri; brother-in-law Junior Johnson and sister-in-law Martha Shern and numerous nephews and nieces. He was preceded in death by his wife, Carol, son, Daniel and daughters-in-law Joan and Laura. Visitation will be held from 9:00 a.m. until the time of service on Friday, Jan. 17, 2020, at the Trinity United Methodist Church in Albia. Funeral services are Friday, Jan. 17, 10:30 a.m. at Trinity United Methodist Church, the Rev. Roger Henry officiating. Military rites will be provided by the American Legion of Albia, Melrose and Lovilia. Burial will be in Waverly, Ia. Memorials can be made to the Trinity United Methodist Church Family Life Center or the Daniel Huston Memorial Scholarship at Wartburg College.

Don L. Huston, 92, of Albia died on Saturday, Jan. 11, 2020 at the Monroe County Hospice Room. He was born on May 12, 1927 to Louis and Nina Blake Huston in St. Louis, Mo. Following his high school graduation he enlisted in the U.S. Army Air... View Obituary & Service Information

The family of Don L. Huston created this Life Tributes page to make it easy to share your memories.

Send flowers to the Huston family.