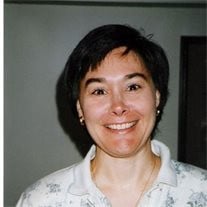 Diane Sue Grimes, age 52, of Albia, formally of Des Moines, died Sunday morning, July 27, 2008, at the Monroe County Hospital in Albia. Diane was born October 25, 1955, in Des Moines, Iowa to Donald and Alice (Ewing)Blasky. Diane attended school and graduated from South East Polk High School, Class of 1973. Diane later attended DMACC and received her Associate Degree in Accounting. On October 9, 1998 Diane married Richard Grimes at the Trinity United Methodist Church in Albia. Diane lived in Saylorville and worked for several years at Garvis Honda in Des Moines as the office manager. In 1998, she moved to Albia and worked at the front desk of the Monroe County Health Clinic. Later, she worked for the Oskaloosa school system, before going to Iowa Aluminum as the office manager where she worked since its inception. Diane was very talented and gifted with arts and crafts. She was a master quilter and won several awards for her quilts and crafts. Diane donated and gave many quilts away. She enjoyed baking cakes, canning foods, Southern Gospel Music, traveling and was a long time blood donor. Diane was very well known throughout Iowa for her collection of Lady Head Vases, and volunteering with her husband on the Operation Christmas Child Program. Diane was a very active member with the Highland Park Christian Church and attended the Bethany Reformed Church while living in Saylorville. Diane attended the Trinity United Methodist Church in Albia and was active in the bell choir. Later she was a very active member of Faith Community Church, where her husband ministers. She co-hosted a radio show with her husband Richard called Heavens Jubilee on Sunday nights. Diane is survived by her husband; Richard Grimes of Albia, her children; Adam and his wife Jennifer Black of Seymour, MO, Andy and his wife Heather Black of Ankeny, IA, her mother; Alice Griffieon of Ankeny, IA; mother and father in-law, David and Gladys Grimes of Albia; one brother; Donald Blasky Jr. and his fianc�e Kelly, one sister; Mary Berry, one niece; Emma Diane Berry, three nephews; Matt, Phil, and Ted Sullivan. Diane is also survived by one grandson; Noah Black and many other loving family members. Diane is preceded in death by her father; Donald Blasky. A Funeral Service will be held at 10:30A.M., Wednesday, July 30, 2008, at Trinity United Methodist Church in Albia, with Rev. Kevin Leveck, and Rev. Lois Williams co-officiating. Burial will follow services at Oak View Cemetery in Albia. Visitation for Diane will begin at 10:00 A.M., Tuesday, July 29th, at the Winfield Funeral Home, with the family present from 4 to 8:00 P.M., Tuesday evening. A Memorial has been established to the Faith Community Church of Eddyville, The Operation Christmas Child Program, or the National Ovarian Cancer Society.

The family of Diane Sue Grimes created this Life Tributes page to make it easy to share your memories.